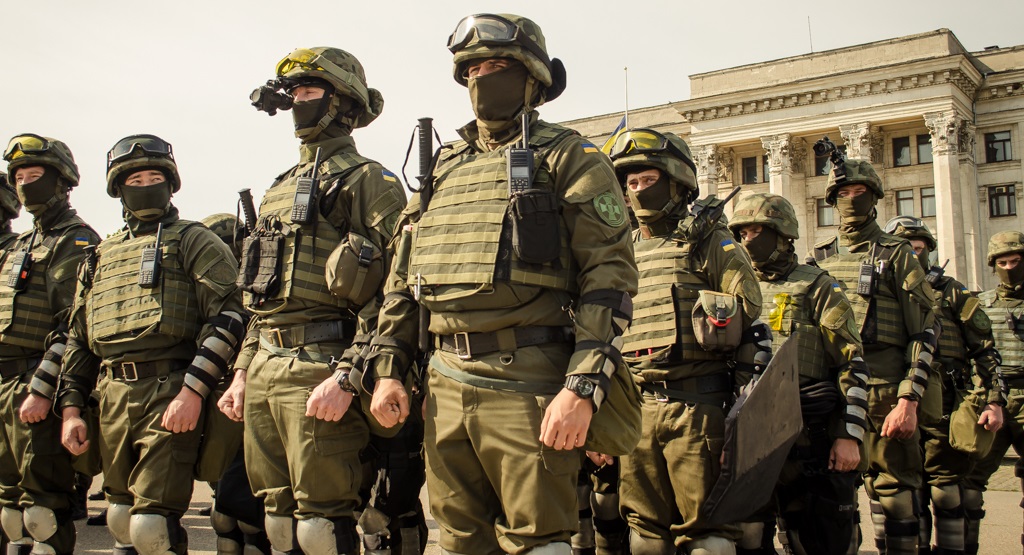 The authorities closed off the Kulikovo Pole square under the pretext that a bomb threat had been called in. Close to 3 000 police officers and members of the national guard had mobilized. Photo: Alexandr Tonkoshkur

Close to 2,000 people gathered in the city of Odessa in southern Ukraine to lay down flowers in memory of the massacre in the Trade Unions House two years ago, when 48 opponents of the new regime in Kiev were burnt to death after riots in the city. Police and military blocked off the entire area and Euromaidan activists threatened with violence to “stop the separatists”.

Many had come to Kulikovo Pole square in Odessa on May 2 to lay flowers at the Trade Unions House in order to commemorate the 48 demonstrators who were burnt to death inside the building as it was under siege during the disturbances on this day two years ago. They were met with barriers, riot police and soldiers in armored vehicles.

Authorities had dispatched around 3,000 men in total, and Kiev had sent reinforcements, among those 300 men from the infamous Azov battalion. The mobile phone network was also down in many places in the city, possibly on police orders.

Authorities announced that there had been bomb threats against the square, and that no one was allowed to go in for that reason. Because the barriers were erected at 9 o’clock in the morning and weren’t removed before 12 hours had passed, protestors claim that the bomb threat was only an excuse to not let anyone near the still fire-damaged house. Meanwhile, the pile of flowers grew on a patch of grass by one of the entrances to the square. Many came and went during the day, and at its most, almost 2,000 people were gathered at the square, around 2 PM.

Odessa is a city divided between supporters of, and protestors against the Euromaidan protests in Kiev in 2014 and the regime that took power after the fall of overthrown Russian-friendly president Victor Yanukovych. While opponents of the revolution in Kiev view the fire in the Trade Unions House as a massacre, Kiev-supporters think it was an act of heroism which thwarted a Russian invasion.

Prior to May 2, different groups within the Euromaidan movement had been discussing the necessity of stopping “expressions of separatism” and were prepared to use violence in order to stop the memorial ceremony. They seemed surprised at the number of people who had participated in last year’s ceremony, which in itself disproved the claim that the city’s population is squarely on Kiev’s side, which has been repeated by, among others, newly elected president Petro Poroshenko when he visited the city in 2015, and called it “Banderiska Odessa”, referring to the Ukrainian nationalist and opponent of the Soviet Union during WWII.

It should be added that many of the people who came to honor the memory of those burnt to death in the Trade Unions House do not share all the sentiments of the Kulikovo Pole movement, whatever they are, but wanted to commemorate fallen comrades. All of them, however, were frightened or angry over the threats of the Euromaidan activists, which further increased the tensions in the city. Close to 2 000 people defied the government’s orders and came to lay down flowers, but were stopped by barriers. Photo: Alexandr Tonkoshkur

The government warned that no violence would be tolerated, and a large number of policemen and national guardsmen have been patrolling Odessa’s streets since April 29. The risk of hostilities is expected to remain until April 10, which is the day of celebrating the liberation from Nazi occupation in 1944.

Because the leadership in Kiev has enacted harsh reprisals against all opposition, those that arrived at Kulikove Pole were overjoyed that so many had turned up, but at the same time furious at the barriers and the apparent show of power from Kiev. “Shame on you”, they shouted at the policemen who stopped them from getting near the burnt-out house. Some lay down the flowers they had brought to commemorate “the martyrs of the Odessa massacre” at the feet of the police, while others chose to wait. Only a handful stubbornly chose to remain until the barriers were finally lifted at 9 PM. Flowers at one of the entrences to the square. Photo: Alexandr Tonkoshkur Some put the flowers at the feet of the soldiers blocking the way. Photo: Alexandr Tonkoshkur

A group of politicians from the Oppositional Bloc party had flown to Odessa to participate in the memorial ceremony, but were stopped from leaving the terminal by activists from the Right Sector and other Euromaidan groups. After two hours of disturbances at the airport, the politicians were forced to return home. Only one representative of the Oppositional Bloc, Nicolai Skorik, deputy speaker in the Ukrainian parliament Verkhovna Rada, who lives in Odessa, managed to reach the commemoration. At 4 PM, speeches were held and white doves were released to symbolize the souls of the fallen, while black balloons rising towards the sky represented the grief of their loved ones.

Groups of Euromaidan activists, including football hooligans, also visited Kulikovo Pole during the day, and although few in number were expected to make trouble, but in the end, everything went peacefully. The only fight erupted in the evening, when many of those who waited for hours for the bomb threat to be lifted were getting annoyed. One man punched the chief of Odessa’s Right Sector in the face and was arrested by police. To everyone’s surprise, the man turned out to belong to a support group of the Kiev-loyal Azov militia. Whether he has friends who died in the fire, or was there for other reasons, remains unclear. Several international organizations, including the European Council, has demanded that Kiev do a proper investigation into the fire which, in 2014, claimed 48 lives and injured around 200 people.