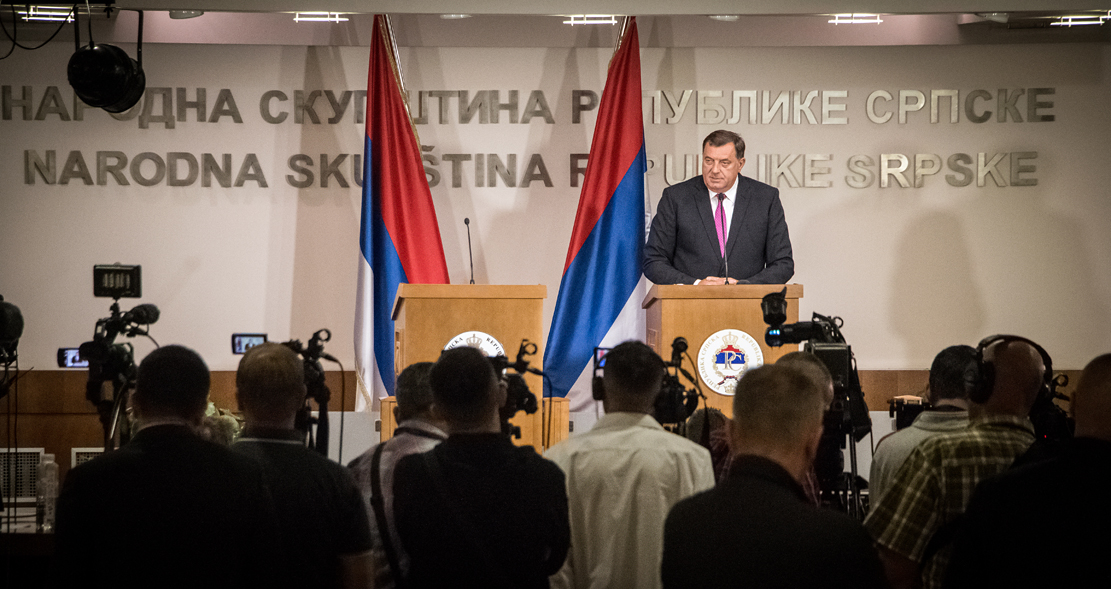 The President of Republika Srpska, Mr. Milorad Dodik, speaks at a press conference after the referendum. He has gained strong support from the voters to safeguard Serbian interests in the country. Photo: Sergey Belous
REPUBLIKA SRPSKA

The recent referendum on the issue of the national day of Republika Srpska brought old tensions to the fore as to its relationship with the rest of Bosnia and Herzegovina, which the republic is a part of. The successful plebiscite showing overwhelming support for the “national interest” of the enclave republic strengthened the hand of its president Milorad Dodik. His meeting with Russia’s President Vladimir Putin also seems to reveal a keen interest taken by Russia in the issue and potential future support from the Kremlin for the Serbian inhabitants of Bosnia and Herzegovina.

On September 25th a referendum was held in Republika Srpska (an entity inside the federation of Bosnia and Herzegovina) for the first time in its history. At issue was the celebration of the Day of Republic – January the 9th. An overwhelming majority voted in favor of the national celebrations. The holiday of Republican Day was earlier held in the Serbian entity annually, but in November of 2015 the Constitutional Court of Bosnia and Herzegovina declared it unconstitutional.

The federal government in Sarajevo, the capital of Bosnia and Herzegovina, voiced it’s dissatisfaction with the plebiscite to be held in Republika Srpska. Also Brussels and Washington took a critical stance. The High Representative for Bosnia and Herzegovina, Valentin Inzko, condemned the Referendum and threatened the President of RS Dodik with sanctions.

There were also threats of outright violence. The ex-head of Bosnia and Herzegovina‘s military staff, Sefer Halifovic, said that if there was a Referendum, military reaction would follow, and Republika Srpska would be eliminated. Representatives of the ruling party of Bosnia and Herzegovina however hastened to remark that the General’s opinion did not reflect the official position of Sarajevo, but that they “understands the concern of Bosnian patriots”.

The reaction of the Srpska government in Banja Luka to such threats was harsh: President of Republika Srpska Milorad Dodik warned that if force was used against the Republic, it would at once declare independence. “We are not for a single moment going to stay on as a constituent part of the state, in which our counterparts use violence against us”, he emphasized. However, the Referendum was held in a peaceful atmosphere without any incidents.

The attendance of the plebiscite reached 55.7 per cent, which is close to the usual attendance for elections in the country, with 99.81 per cent of participants voting in favor of continued celebration of the day of Republika Srpska on January 9.

On the one hand it became a resounding success for the ruling elite of Republika Srpska, as just about for the first time in the post-Dayton period Banja Luka did not kowtow to Sarajevo and persisted in defending its national interest, although it all started from a very symbolic issue. On the other hand, many members of the ruling party – the Union of the Independent Social-Democrats, SNSD – expected greater enthusiasm on the part of the citizens. On the sidelines of the party meetings they even talked about the so-called “quiet boycott” carried out by the opposition parties that gave instructions to their local branches to try to marginalize the Referendum and keep it out of public view. Their reaction was personal, having labeled it “the vote of confidence in Dodik”. This detail is especially interesting in the light of the fact that all the parties without exception voted in favor of holding the nation-wide plebiscite in the parliament earlier. 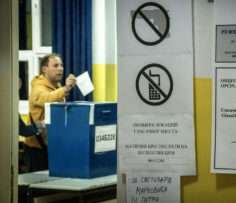 The referendum could be held without any disturbances. Photo: Sergey Belous

The initiative of questioning the legality of the Republican holiday, which had resulted in the ban of the celebrations, had been put forward by a member of the Presidium of Skupstina, Bakir Izetbegovic, representing Bosnian Muslims and leader of the biggest Bonin political party, the Party of Democratic Action (SDA). He happens to be the son of Alija Izetbegovic, the founder of the SDA, who played a significant role in instigating the Bosnian war in the early 1990s. The representative of Bosnian Muslims was also displeased by the fact that the date of the Republican holiday coincides with the Orthodox St Simeon’s day (the saint, who, due to this coincidence, is the patron of Republika Srpska) – allegedly it encroaches on the rights of representatives of other confessions (Catholic Croats and Muslim Bosnians).

Officially the government of Serbia assumed a reserved and somewhat restrained stand in order to not sour the relations with Sarajevo, whereas in fact the Serbian leader had secretly expressed support for the fraternal republic. Probably, the support of Moscow became the decisive one for Banja Luka (the capital of the RS) in this situation. The President of RS, Milorad Dodik, visited Moscow on the eve of the Referendum on September 23 in response to Russian President Vladimir Putin’s invitation. The very fact of their meeting became a strong enough signal for Bosnian Serbs that Republika Srpska can count on Russia’s support. The details of the meeting are not widely known but reports have surfaced of a discussion on bilateral cooperation and the situation in the Balkans. The perception was however that Republika Srpska could count on the support from Russia in the face of threats from Sarajevo.

If we put aside the issue of the national holiday itself, we should note the following real consequences of the Referendum: firstly, for the first time after the Dayton Agreement, Banja Luka had worked out and  tested the mechanism of a plebiscite, which will now be used to solve other, more important issues – for instance, joining NATO or recognition of the jurisdictions of the centralized Court and Prosecutor’s Office; secondly, not only a symbol of the Serbian entity was protected, but a sample of public opinion was carried out that demonstrated that the authorities do not have to make further ruinous concessions to Sarajevo as they enjoy significant support from the people.