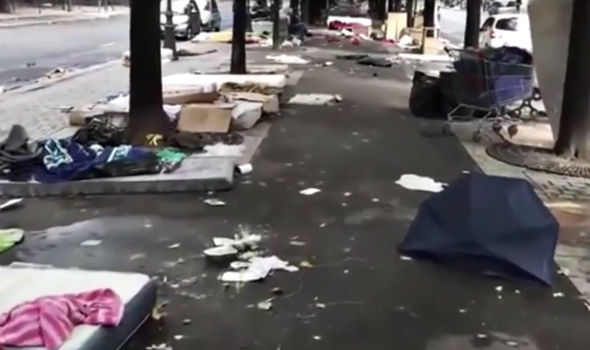 Parisian streets turned into another jungle

A filmmaker has captured the trail of devastation left by migrants in Paris. The African influx had turned some erstwhile tourist-lined streets of the French capital into another Calais jungle.

According to Generation Europe: “The Paris you know or remember from adverts or brochures no longer exists.”

“While no part of Paris looks like the romantic Cliches in Hollywood movies, some districts now resemble post-apocalyptic scenes of a dystopian thriller.

“Scenes like this might spread to areas frequented by tourists, forever changing the last romantic parts of Paris that match what most people have in mind when they think of the iconic city.”

With the help of a hidden camera the aftermath of a raid on a migrant camp in the north of the city on Avenue de Flandre, near the Stalingrad Metro Station, was recorded

According to the filmmaker “tens of thousands” had urinated and defecated in the streets. Africans, mainly Sudanese and Eritreans, were herded into groups a riot squad holding up protective shields and tear gas as they moved in.

Police officers in full riot gear had arrived to force the migrants on to buses – and all that was remained was streets filled with mattresses and piles of rubbish.

The anonymous cameraman managed to film the migrants moments before the eviction.

The footage shows the men had been forced to live in harrowing conditions but the filmmakers were angry at the migrants blaming them for coming to ruin the iconic image of the French capital.