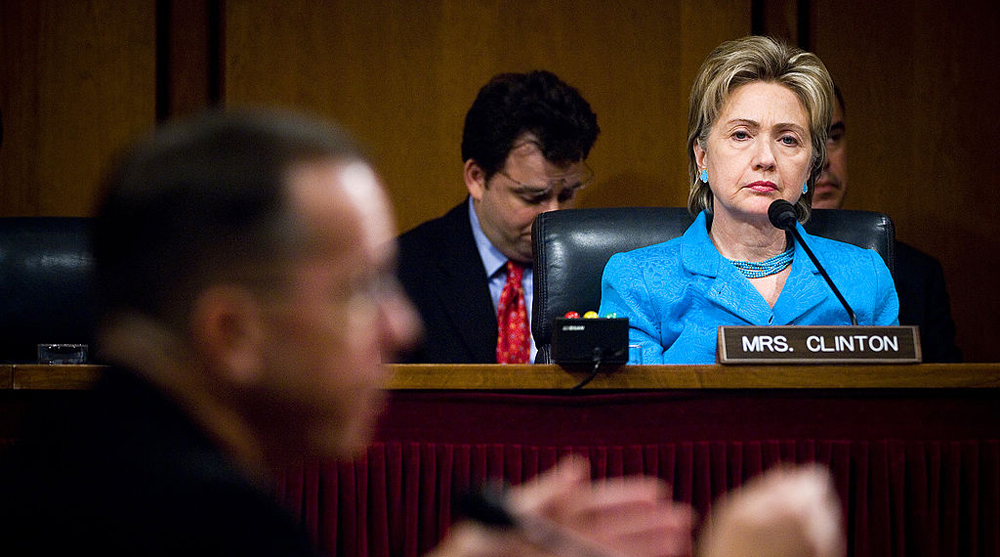 Hillary is answering to a ‘Shadow Government’ leaks show

The year 2016 is quickly becoming the year in which conspiracy theorists were proven right. The torrent of Podesta emails from WikiLeaks continues to expose crimes committed by Hillary Clinton and her surrogates, but even more interesting is the uncovering of a group actually referred to as "The Shadow Government" by the FBI.

On Monday, the FBI began releasing their own documents. From some 100 pages of heavily redacted interview summaries of the FBI’s investigation into Hillary, nothing short of a bombshell emerged. An ultra-secret, high-level grouping known as “The Shadow Government” is operating within the State with impunity.

The pages contain interview summaries conducted by the FBI along with notes from its agents, which may offer the public a glimpse into the government’s official investigation.

The last 100-page release is the fourth installment of documents related to the Clinton email probe, all released by the FBI. The most recent release also contains allegations regarding a “quid pro quo” request from Patrick F. Kennedy, the undersecretary of state for management, among other claims.

According to the FBI document, Kennedy “pressured FBI agents to change the classification on sensitive documents found on Hillary Clinton’s private email server” in “exchange for a ‘quid pro quo.’” Promptly after the document’s release, both the FBI and State Department denied such an arrangement took place — but that has not stopped the US House Committee on Oversight and Government Reform from demanding more information on the exchange.

In a letter addressed to Secretary of State John Kerry, the committee chair, Rep. Jason Chaffetz (R-CA), along with Rep. Devin Nunes (R-CA), the chair of the US House Permanent Select Committee on Intelligence, claimed to have reasons to believe Kennedy “inappropriately influenced the review of Secretary Clinton’s emails”.

As Heavy pointed out, a State Department official, Kennedy, offering a “quid pro quo” if the FBI would flip at least one email from “classified” to “unclassified” so that it could be released into the public domain and buried by the weight of thousands of similar pages, in response to a Freedom of Information Act request, is a clear sign of an official acting on a higher command in order to protect the Democratic contender.

The newly released FBI documents, show that so-called conspiracy theorists have been vindicated. The reason Hillary Clinton has been able to escape accountability, is because she is being protected by this group operating beyond the realms of scrutiny.

“There was a powerful group of very high-ranking STATE officials that some referred to as ‘The 7th Floor Group’ or ‘The Shadow Government.’ This group met every Wednesday afternoon to discuss the FOIA [Freedom of Information Act] process, Congressional records, and everything CLINTON-related to FOIA/Congressional inquiries,” the FBI’s interview summary concluded.

The 7th floor presumably refers to the 7th floor of the Harry S Truman Building in Washington, DC, which acts as the office building for the US State Department, and contains a 7th floor that has no windows.

According to the document, FOIA, or Freedom of Information Act requests relating to Clinton, were sent to the group for review. The released documents uncovered an unidentified person describing in detail how FOIA requests that could potentially harm Hillary, were routed through these special channels.

CNBC reported that the group, according to the summary, argued for a Clinton document release to be conducted all at once “for coordination purposes” instead of on a rolling basis as would normally be the case. But the “Shadow Government” did not get its way, and the agency in charge decided for a rolling release, the FBI summary said.

However, the FBI summary fails to mention many other instances in which this Shadow Government was called on to deliberate on how to shield Clinton. The Free Thought Project reported last week that, according to a whistleblower, Clinton might have had had help from the FBI in their recommendation that Hillary not face criminal charges for her mishandling of classified intelligence through the use of a private server.

CNBC said the FBI’s documents show the “blatant” disregarded Clinton showed for protocols, including her frequent refusal to attend foreign diplomatic functions with the local ambassador.

“This frequently resulted in complaints by ambassadors who were insulted and embarrassed by this breach of protocol,” the interview summary said, adding that the subject claimed that “Clinton’s protocol breaches were well known throughout Diplomatic Security and were ‘abundant.’”

In the letter to Secretary Kerry, Chaffetz and Nunes added that members of the Shadow Government included Kennedy and “several former attorneys from the law firm that has represented [Clinton] in this investigation, Williams & Connolly LLP,” suggesting Clinton’s legal representatives may have influenced the FBI much like Kennedy attempted to.

Alice Salles via TheAntiMedia.org says both congressmen are now urging Kerry to remove Kennedy from his post until further investigation can show proof the undersecretary did not have anything to do with the FBI’s decision not to prosecute Clinton.

FBI Director James Comey initially decided not to prosecute former Secretary of State Clinton, claiming the move was apolitical, but the willingness of a federal agency to now expose their own corruption, is a new development.

“I want the American people to know we really did this the right way,” Comey said in July. “You can disagree with us, but you cannot fairly say we did it in any kind of political way. We don’t carry water for anybody. We were trying to do what the right thing is.”

At the time, Comey explained he arrived at that particular decision because “no reasonable prosecutor would bring this case, no reasonable prosecutor would bring the second case in 100 years focused on ‘gross negligence.’” Now, the FBI’s own notes seem to argue that Clinton and her State Department minions may have been involved in criminal acts other than gross negligence.

In an exclusive by The Daily Caller News Foundation, diGenova explains why many former and current FBI officials believe James Comey, the director of the FBI, is a “dirty cop.” When Comey refused to recommend prosecution of Democratic nominee Hillary Clinton for her misuse of classified government information in July after “a fake and sophomoric” investigation, he bred cynicism and tainted the premier law enforcement agency.

DiGenova questions the timing of the latest release. “Why shouldn’t the American people be worried about the legitimacy of an election when one of the highest law enforcement officials in the country, James Comey, the Director of the FBI, goes in public and lies about the reasons for what he did (in refusing to prosecute Hillary Clinton). The biggest single contributor to cynicism about this election is James Comey.”

Meanwhile a complaint was filed on behalf of James O’Keefe III and Project Veritas with the Federal Election Commission, as Hillary for America, the Democratic National Committee, and numerous third-party groups appear to have knowingly violated federal coordination laws.

Veritas Action found numerous instances of these supposedly independent actors seeking permission from Hillary for America for their messaging or getting approval for just how extreme and violent their tactics could be. As one operative described it, they maintain secret, ongoing communications between the DNC and Super PACs and third-party groups. Under federal election law, this sort of material involvement by a candidate campaign committee or a party committee is blatantly illegal.

Wikileaks founder Julian Assange has maintained that a huge cover-up on the part of the FBI with regards to Clinton’s email practices was taking place, but has not commented on the latest release.

“It is very strange that it was released Friday afternoon on a Labor weekend [in September]. I do think it brings up questions to what sort of game the FBI is trying to play. But Hillary Clinton says she can’t remember what a “C” in brackets stands for. Everyone in positions of government and in Wikileaks knows it stands for ‘classified confidential,’” Assange said earlier.

While FBI director’s Comey’s role has not been fully explained, it has become quite clear that Clinton answers to a very powerful shadow group within the state and therefore remains above the law.