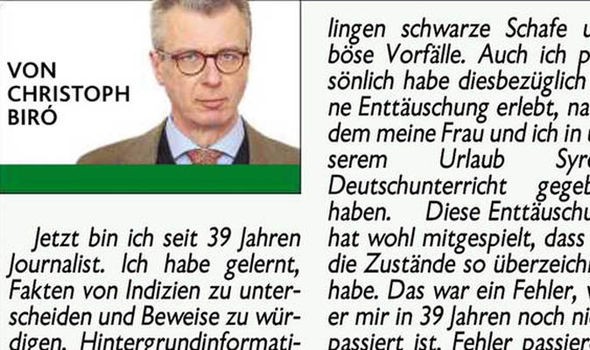 Christoph Biro, editor of Kronen Zeitung, is to be tried for hate speech over a commentary he wrote about the migrant crisis last year.

The editor of Austria’s largest daily newspaper has been shown the door after breaking ranks with the controlled media and admitting the truth about the rampant criminality, filth, and Third Word destruction which has accompanied the current invasion of Europe.

Biro, a liberal who earlier said he and his wife had given up their holiday to “teach refugees German” was instantly sacked from his job—even though the official statement from Die Krone said he had “voluntarily stepped down” from his position.

He made his views on the mass of migrants travelling to Europe known in an editorial published on October 25 last year. Here is part of his editorial:

Gone are the days when the incoming refugees were received with applause …too much happened since then.

We know of young, testosterone-driven Syrians who can engage in extremely aggressive sexual assaults, to say the least. Afghans have slashed the seats in ÖBB train compartments [Österreichische Bundesbahnen, Austrian Federal Railways]. These acts have no relation to their emergency situation. “We do not sit there,” they say, because “Christians have sat there!”

In the emergency shelters, they do not use the sanitary facilities, but do their business just next to it and then call for female assistants: That means nothing to them….

Hordes have stormed the supermarkets, tearing the wrappers off [items], taking what they want, and then disappearing. The police are powerless. Integration? A nice word, nothing more. Integration can at best work only in individual cases.

As if on command, thousands still trample over our borders, although all forces of law and order are overrun since [last] Friday, and all the emergency quarters are occupied to overflowing. . .

… at least now ALL has become clear—no matter whether right or left, or hardliner social romantic: The limits have to be made set. The humanitarian catastrophe has to be stopped, especially for Austria and its inhabitants.

Describing the majority of migrants as “testosterone driven Syrians”, he recounted the multiple sexual assaults on European nationals by asylum seekers, calling the transgressions “extremely aggressive”. The editor remarked not only on the rising number of sexual assaults, but also on the property damage committed by migrants, reports another Austrian daily, Kurier.

A prosecutor in Graz, Austria’s second largest city, has confirmed they will be seeking charges against Biro after the case was brought to them by left-wing SOS Mitmensch.

Open border enthusiasts, SOS Mitmensch, describe themselves as a “pressure group for human rights”. They released a guide for Austrians earlier this year on how to successfully get people who remark on migrants tried for hate speech crimes.

Although there have been cases of individuals being tried for hate crimes in Germany and Austria over anti-migrant comments, the case would mark the first time a member of the press has been prosecuted for such an offence.

Moreover, Biro’s assertions that Afghan men were responsible for slashing the seats of trains transporting them to Germany because they refused to sit where Christians had previously sat, provoked yet more denials. The Austrian train company ÖBB, stated that no Afghans had destroyed their seats.

Biro “took four weeks off” from his position at the time, claiming that he had lost perspective and proportion of the situation. But despite his apology, he is now facing charges for his comments.

The prosecutor in the Styrian capital of Graz has confirmed they will be seeking charges against Biro.

Die Krone has pulled the online version of his editorial, only leaving up a “page not found” in its place.

Leader of the left-wing group, Alexander Pollak, claims that his organisation has been “inundated” with requests on how to report anti-migrant comments to the police. SOS Mitmensch has also launched virulent attacks on the anti-mass migration Austrian Freedom Party (FPÖ) who have significantly risen in the polls over the course of the migrant crisis.

A Vienna prosecutor is currently looking into charges against FPÖ leader Heinz-Christian Strache over posts made on his Facebook page by other users that may be deemed “inflammatory” by Austrian law. The prosecutor is looking into whether Strache or his team could be liable for not removing offensive comments “fast enough”.

While cases of sexual assault have been rampant across Austria over the past year, Austrian patriots are discouraged from stopping the mounting number of attacks.

At Vienna’s Westbahnhof railway station in January, the platforms were turned into a mass brawl which only ended when police swooped on the scene and arrested four of the criminal refugees.

The incident started when a large group of Afghan refugee-robbers turned up at the station with criminal intent. They had not been there long when they pounced on their first victim, a 22-year-old Austrian, grabbing his cell phone.

When the Austrian public spontaneously intervened to thwart the robbery, a crowd of migrants fought back. Part of the brawl was captured by onlookers on their cell phones and distributed on social media.

Social media is actually rife with photographic and video evidence that Biro’s descriptions were true and accurate.

At the “Uncensored” (Unzensuriert.at ) news service in Austria, these and other mainstream lies and cover-ups are exposed. One of their articles, “Denial and cover up: This is how the police leadership deals with asylum seeker criminality” (Leugnen und vertuschen: So geht die Polizeiführung mit Asylantenkriminalität um, 27. Oktober 2015), exposed how Austrian police have been ordered to stand aside and “look the other way” as “thousands flock into the country illegally.”

BerlinThe German Teachers' Association (DL) has criticized the participation of students in the climate strike of the "Fridays for Future" movement (FFF) on Friday. "We refuse that compulsory schooling is lifted in favor of political actions – for example as part of a so-called climate strike," said DL President Heinz-Peter Meidinger.