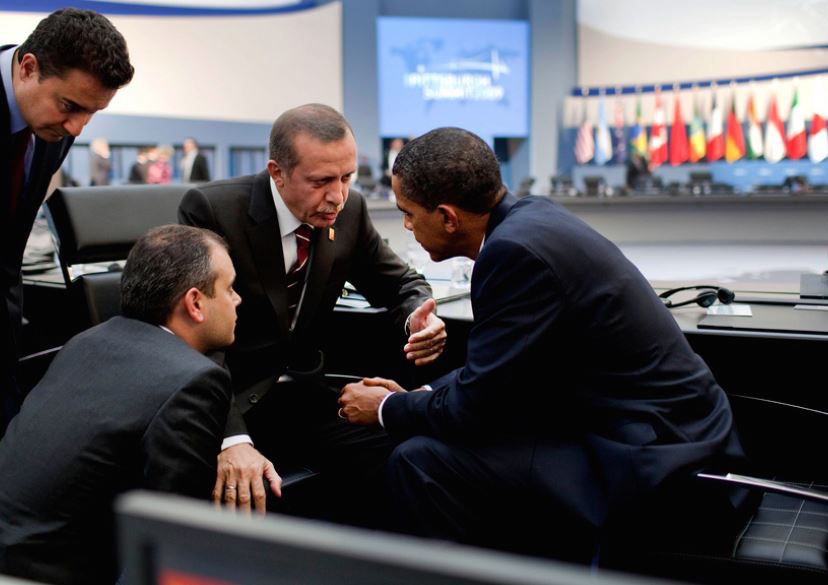 Turkish President Recep Tayyip Erdogan said on Thursday that the Turkish military would not fight alongside Kurdish forces to liberate Raqqa from the Islamic State.

Erdogan’s statements came after Western officials spoke about an operation to liberate Raqqa from ISIS using the Kurdish-led Syrian Democratic Forces. However, Turkey rejects the involvement of any Syrian Kurdish forces in the operation.

The president rejected outright the tentative plan for an offensive against the Islamic State’s Syrian stronghold outlined a day earlier by Army Lt. Gen. Stephen Townsend. The US-led coalition against the ISIS is likely to provide air support but Turkey opposes the involvement of any Syrian Kurdish militias.

Two days ago, Townsend said that fighters from the Syrian Kurdish People’s Protection Unit would join the forces tasked to isolate Raqqa. US officials say the expect Arab forces to control the city and not Kurdish forces.

However, Turkey’s Defense Minister Fikri Isik has reiterated Ankara’s objection to having Syrian Kurdish fighters participate in any operation to capture the ISIS stronghold of Raqqa.

Raqqa, the de facto capital of ISIS, has long been the next target in the fight against the jihadists but there is a debate raging on how the offensive would look on the ground.

Since August 24, Turkish tanks and special forces have been inside northern Syria providing support to rebel fighters in the border area.

In the beginning of the Syrian Civil War, Turkey trained defectors of the Syrian Army on its territory, and in July 2011, a group of them announced the birth of the Free Syrian Army, under the supervision of Turkish intelligence, the Guardian reported in 2012.

The Turkey-backed rebels comprise different Syrian opposition brigades, according to experts. Together with Saudi Arabia and Qatar, Turkey has provided the “rebels” with arms and other military equipment.

But the operation dubbed “Euphrates Shield” has another purpose: to halt the westward advance of the Syrian YPG Kurdish militia and not ISIS. Ankara says the People’s Protection Units (YPG) and Kurdish Democratic Union (PYD) are linked to the outlawed Kurdistan Workers’ Party (PKK) waging an insurgency in Turkey since 1984.

The PKK is proscribed as a terrorist organisation by Turkey, the European Union and the United States.

In August the Kurdish-led Syrian Democratic Forces (SDF), a US-backed alliance of about 30,000 Kurdish and Arab fighters, captured Manbij from ISIS. But Erdogan has repeatedly said any operation to retake Raqqa cannot be done with YPG elements and on Thursday, and added the Turkish operation would target Manbij as well.

He later said he told US President Barack Obama in a telephone conversation on Wednesday that he opposed any YPG or PYD participation.

Meanwhile, a Russian diplomatic source told Izvestia newspaper that Moscow would offer Washington a plan for its participation in the Raqqa military operation. The source also spoke about a possibility of exchanging intelligence data concerning terrorist positions in Syria and about coordinating air operations.

The latest developments coincide with the one-day official visit of Iranian Foreign Minister Mohammad Javad Zarif to Russia for talks on the Syrian crisis.

“Turkey favors Syrian jihadist groups that emerged from Al-Qaeda, a top Kurdish commander has told Russian media. He claims that Ankara, along with Saudi Arabia and Qatar, have been furnishing extremists with weapons and munitions.

The support the terrorist groups have been given by Turkey is confirmed by documentary evidence, Murat Karaylan, co-founder of the Kurdistan Workers’ Party (PKK), told RIA Novosti.

Turkey’s ruling Justice and Development Party (AKP) has an “ideological inter-relationship” and joint interests with the radical Islamists, Karaylan said in an interview to RIA given in the Qandil Mountains, an area in Iraqi Kurdistan, next to the Iraq–Iran border.

“Along with Saudi Arabia and Qatar, Turkey has been sponsoring jihadists [in Syria] that emerged from Al-Qaeda… These states backed and armed radical Salafi groups, which base all of their actions on sharia [law],” he said.

The Kurds have documented evidence they say that the AKP, which is headed by Turkey’s Prime Minister Ahmet Davutoglu, has ties with all those [ISIS] terrorist groups, Karaylan said.

“We’re 100 percent positive Turkey is maintaining contact with ISIS, we’ve seen it with our own eyes,” the PKK leader said, stressing that meetings between top Turkish negotiators and ISIS members have been registered on multiple occasions.”

Turkish journalist Can Dundar, exiled in Germany, says the mainstream media is almost completely controlled by the government and was being used as a “propaganda machine.” Dundar, the former editor of the Turkish daily “Cumhuriyet,” was sentenced to five years in prison for publishing information about Turkish arms shipments to Syria, but fled to Germany.

“There is such a heavy cloud of fear over [Turkey today] that no one dares to write, talk or even tweet about atrocities. Self-censorship is all around,” he said.

Thursday EU lawmakers called on Ankara to release all the journalists who have been imprisoned without proof for alleged involvement in July’s attempted coup d’etat.

Meeting in Strasbourg, the parliamentarians passed a resolution calling on Turkey to “narrow the scope of the emergency measures, so that they can no longer be used to curtail freedom of expression.”

They asked the EU’s foreign service, the European External Action Service, to continue monitoring the implications of the ongoing state of emergency to ensure Ankara did not use the “broadly defined Turkish anti-terrorism legislation” to curtail press freedom.

Turkey last week extended its state of emergency, declared in the wake of the coup attempt on July 15, for another 90 days. The government has used the emergency measures to launch a wide-ranging crackdown on dissenters.

US-based Muslim cleric Fethullah Gulen, who Turkish President Recep Tayyip Erdogan has accused of masterminding the coup. At least 32,000 people have been arrested since July, among them soldiers, police officers, teachers, members of the judiciary and the press.