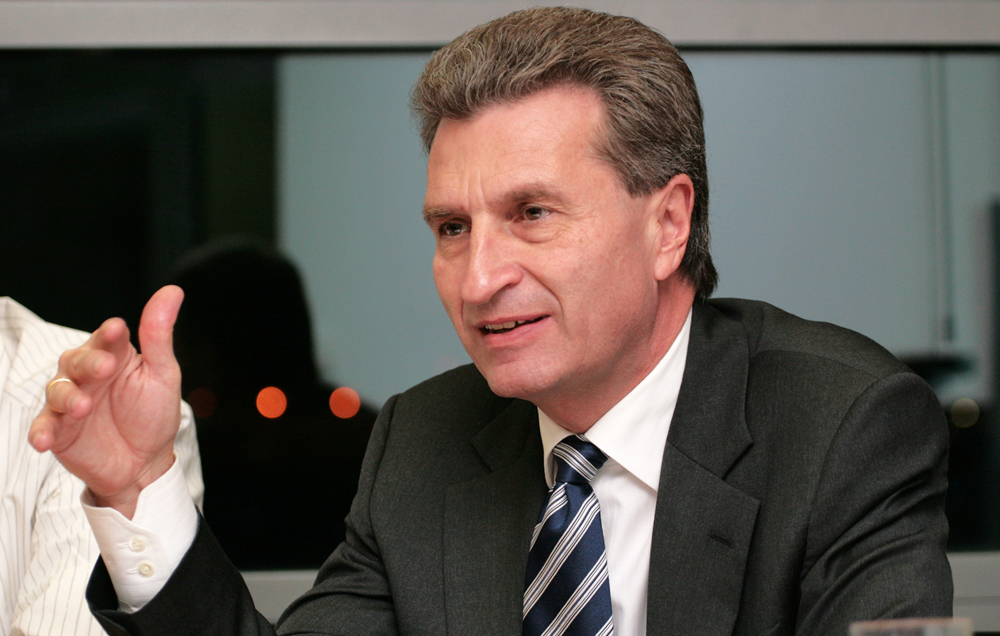 European Commissioner Günther Oettinger is in hot water over jokes he made considered to be "racist and homophobic", but Oettinger's unfriendly bias against children went unnoticed in the German media.

Oettinger previously served as the state premier of Baden-Württemberg until 2010 and is well-known for his nasty remarks, having once commented he would rather commit suicide than be married to far-right populist Alternative for Germany (AfD) party leader Frauke Petry.

The politician was caught on video that surfaced online on Saturday making jokes about Chinese people and gay marriage. According to a YouTube user, Oettinger used a racial slur to describe people of Asian descent prior to filming the video.

On Friday the YouTube user called “Sebas Travelling” posted the video from comments during a speech Oettinger gave on Wednesday in the northern German city of Hamburg. The speech was laced with American-sounding phrases, but mostly used in the wrong way.

Oettinger starts off by stating his preference for reading the news in print while complaining about how many readers now rely on the “heads down, display on” version. It is considered a particulary surprising remark from the current European Commissioner for Digital Economy and Society.

In more spiteful comments to follow, Oettinger lays into Chinese diplomats with regard to the EU’s future and its political weaknesses.

“Last week Chinese ministers were with us for the annual China-EU summit. Nine men, one party. No democracy. No women’s quota, no women,” Oettinger told a laughing crowd. “All of them in suits, single-breasted jackets, dark blue. All of them had their hair combed from the left to the right with black shoe polish,” he said of the Chinese diplomats.

After the video surfaced, Oettinger, caught on the backfoot, told “Die Welt” on Saturday, his speech needed to be heard “in context” and defended himself against accusations of racism.

Oettinger said his use of a derogatory term in reference to China was a “somewhat careless statement that was in no way meant to be disrespectful to China”.

His comments, Oettinger said, were meant as a warning to Germans to rethink their complacency in the digital sector as Europe needed to catch up to countries like China and South Korea.

The video also showed Oettinger’s contempt for the current political agenda in the country, “The German agenda does not meet my expectation of German responsibility in any way,” he said to loud applause.

He listed issues such as maternity leave, retirement and child care allowances as a drain on the state and finished by wryly expressing the wish that “perhaps compulsory gay marriage will be introduced”.

Germany is notoriously unfriendly to children. The Edeka supermarket is said to have thrown a mother and child out of one branch, because the child “was too loud”.

The 27-year-old mother and her two-year-old daughter were thrown out because customers complained, the German daily “Bild” reported.

In another incident the mother apologized to the saleswoman of Rossmann (Hilden) several times when her toddler started crying, but the salesperson told the mother that the child was not allowed to go into the store again, but had to wait outside. The child was only 2 years old, Focus Online reported.

Oettinger told “Die Welt” that he has nothing against gay marriage, but did not comment on his remarks about how unwanted children are. He explained instead that he merely wanted to highlight how important “economic competitiveness” is to Germany.

But the LBGT community could not pass the opportunity by to jump on the victimhood bandwagon. German Association of Gays and Lesbians has called for Oettinger to apologize for his remarks. Likewise, the general secretary of Germany’s Social Democratic Party (SPD), Katarina Barley, and senior Green Party politician Volker Beck questioned Oettinger’s suitability as an EU commissioner.

The commissioner continued his mean-spirited and unpleasant rant. In addition to comments about Chinese delegates and gay marriage, Oettinger also remarked that former German Chancellor Gerhard Schröder now has some time on his hands since the North Stream 2 pipeline will not be built and his wife left him.

Schröder is currently a member of the board for the pipeline project between Russia and Germany. The former chancellor’s marriage ended in divorce last year.

On Friday, it was announced that Oettinger will replace outgoing EU Commissioner Kristalina Georgieva, overseeing the 28-member bloc’s budget portfolio.

But while Oettinger lashed out at the AfD’s leader, he blamed the “open door” policy for creating Europe’s refugee crisis, which has seen tens of thousands of people arrive at EU borders every day since September.

He has branded Germany’s asylum law as a “magnet” for refugees and has called for a drastic rethink as to how to deal with the crisis.

“The German asylum law acts like a magnet for refugees,” the EU’s Commissioner told the business daily newspaper Handelsblatt.

Oettinger displayed his forked tongue not long after lambasting Czech President Milos Zeman, who urged the Czech parliament on Tuesday to ignore EU quotas and take no refugees.

“The refugee quota has been approved by a large majority and is European law,” Oettinger said in an interview to German radio ffn. He accused Zeman of “defaming” European law and weakening Europe as a whole.