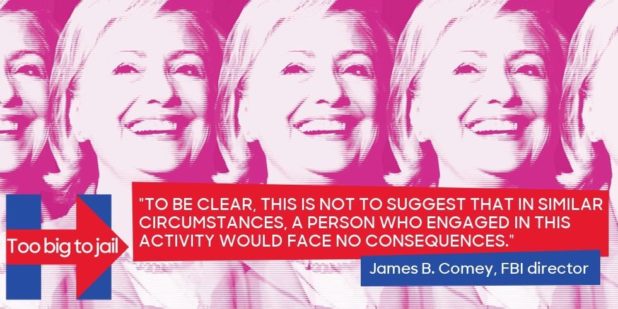 There have been numerous developments in the reopening of the FBI investigation of Hillary Clinton, most notably the declaration of war by Clinton World on FBI director James Comey.

The salvoes started almost 24 hours after Comey’s shock and awe announcement on Friday afternoon, leaving Team Hillary and the rest of Clinton World is disarray about what to do next.

They were attempting to hold back the tide of news coverage following the discovery of Hillary’s mails on the computer of Anthony Weiner, the sex pest and estranged husband of her top aid Huma Abedin.

Clinton World first tried to buy itself time by defining what the meaning of “reopen” was. It was comical, but arguing over definitions are what the Clintons do to buy themselves time until they can muster a counter attack.

But arguing over the right definition was only a holding measure and Clinton World quickly shifted into top gear. Top Democratic strategist James Carville may be the first Clinton surrogate to have officially lost his temper over the investigation into Clinton’s private email server as pressure mounts.

In an appearance on MSNBC on Monday, Carville fumed at the FBI’s decision to reopen the investigation, asserting it is part of a “conspiracy”.

“The House Republicans and the KGB are trying to influence our democracy,” Carville said.

“This is in effect an attempt to hijack an election,” Carville stormed. “It’s unprecedented … the House Republicans and the KGB are trying to influence our democracy,” he said.

He was apoplectic at the news of Comey’s announcement, describing it as “an assault” or “attack on American democracy” multiple times, lifezette.com reported.

Unfortunately for Carville, tall tales about Soviet spies have become somewhat outdated and they pale in importance to the real-life drama of Clinton’s apparent lawlessness.

When the MSNBC anchor reminded Carville that Democrats were praising Comey only a few months ago when he announced the FBI’s decision not to recommend indictment, Carville almost had a fit.

Ever since it was announced, on Friday, the Big Three (ABC, CBS, NBC) networks have gone into attack mode against James Comey, turning what should be a scandal about Clinton into a smear against the FBI director, newsbusters.org noted.

MRC analysts reviewed all media statements that took a position on Comey and Clinton and found arguments against Comey (88) swamped those against Clinton (31) by a ratio of almost 3 to 1.

The media bias for Clinton was obvious. Furthermore, now that the FBI has obtained the needed warrant to start poring over the 650 000 emails uncovered in Weiner’s notebook, the US Justice Department quickly announced it was also joining the probe, and as AP reported, vowed to dedicate all needed resources to the cause.

The DOJ told House and Senate lawmakers that it “will take appropriate steps as expeditiously as possible,” according to assistant attorney General Peter J. Kadzik.

Kadzik is the best friend of Clinton’s Campaign chair, John Podesta, at the DOJ, who will be put in charge of a probe that could potentially sink Hillary.

As the Daily Caller noted, the arrangement “is just the latest example of an apparent conflict of interest between the Clinton campaign and the federal agency charged with investigating the former secretary of state’s email practices”.

Podesta, who would later head up the Obama White House transition effort, wrote that Kadzik was a “fantastic lawyer” who “kept me out of jail” when Kadzik represented Podesta during the Monica Lewinsky investigation.

Kadzik’s role at the DOJ, where he started in 2013, is particularly notable, as he was instrumental in the effort to nominate Lorretta Lynch, who was heavily criticized for her secret meeting with the former president Clinton.

According to a person familiar with the investigation, Abedin has now told her surrogates that she is unsure how her emails could have ended up on a device she viewed as her husband’s computer, the seizure of which has reignited the FBI investigation.

The person, who would not discuss the case unless granted anonymity, said Abedin was not a regular user of the computer, and even when she agreed to turn over emails to the State Department for federal records purposes, her lawyers did not search it for materials, not believing any of her messages to be there.

Comey was sworn in as FBI director in 2013 for a 10-year term. That means if Clinton were to win in November, Comey would serve under her administration unless she chose to remove him.

The stock market however had shown concern about the possibility that Democrats would take the House of Representatives, but on Monday, after new revelations about an FBI probe into emails of a Clinton staffer, those worries were pushed into the background.