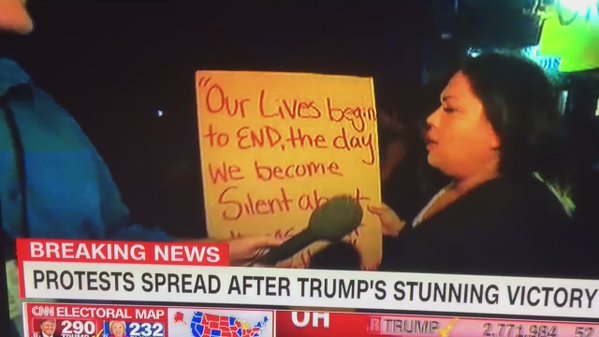 Death threats against the new president-elect flooded social media after the news broke. Twitter was inundated with leftists calling for Trump’s assassination.

In Boston, thousands of anti-Trump protesters streamed through downtown, chanting “Trump’s a racist”.

Many held Black Lives Matter signs and chanted slogans, including “Misogyny has to go,” and “The people united, will never be defeated.” In New York, chants of “Donald Trump go away, racist, sexist, anti-gay” erupted at protests.

Demonstrators could be heard chanting “bitch” and “f*ck Trump” as they marched in unison. Anti-Trump media outlets previously circulated the talking point that “white trash” Trump supporters would be likely to stage violent unrest after they lost the election.

Hundreds of University of Texas students spilled out of classrooms to march through downtown Austin. They marched along streets near the Texas Capitol, then briefly blocked a crowded traffic bridge.

Windows were broken and cars were set on fire in Oakland as protesters lit flares and blocked highways. Several thousand chanting, sign-waving people gathered in Frank Ogawa Plaza in the city. A night earlier, in the hours after Trump won the election, Oakland demonstrators broke windows and went on a rampage to damage property.

Also in California’s San Francisco, hundreds are marching along Market Avenue, one of the city’s main avenues, to join a vigil in the Castro District, a predominantly gay neighborhood.

In Oregon, dozens of people blocked traffic in downtown Portland, burned American flags and forced a delay for trains. Earlier, the protesters attacked a Trump supporter and chased him across Pioneer Courthouse Square. He was assaulted before others intervened.

California is the first large state and the third overall — after Hawaii and New Mexico — without a white majority, according to state officials.

In Los Angeles, protesters on the steps of City Hall set alight a giant papier mache Trump head in protest, while hundreds massed in downtown Seattle streets. Five people were shot and injured near the protest, but police said the shootings and the demonstration were unrelated.

California is a harbinger of the national rise in Latinos in the US. The nation’s Latino population has grown 57 percent since 2000.

The irony of the anti-Trump riots is that he was elected by a system all Clintonites view as legitimate. They were thus protesting against a democratic ballot, the same one that elected Barack Obama.