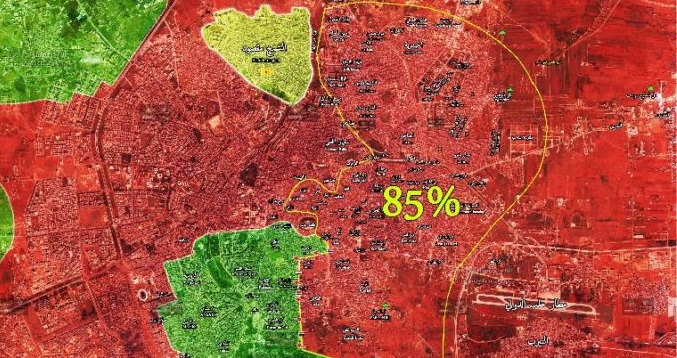 Aleppo to be liberated by the weekend

The war that Hillary Clinton started almost six years in Syria, in March 2011 during the "Arab Spring", is finally coming to an end. It is expected that the whole al-Qaeda- held area will be liberated and cleared of Takfiris as early as this weekend.

After winning the Aleppo battle the Syrian government will have some 35 000 aligned troops available to liberate other areas of Syria which are currently still held by foreign fighters, This is a quite huge, experienced force and one can expect that most of the work still needed to be done to liberate all of Syria will be finished within a few months, blogger Moon of Alabama reported.

The battle for Aleppo, once Syria’s most populous city, is almost over and the “rebel forces” in the eastern part, are realizing that they are in the grips of losing.

On Wednesday the Russian Reconciliation Center reported that government forces have liberated 15 more areas in the eastern parts of Aleppo in the last 24 hours, adding that the advance has allowed the Syrian Army to evacuate 1 200 trapped residents of the city. The Syrian authorities now “fully control 50 neighborhoods in the eastern part of [Aleppo] that account for 70 percent of the territory that was initially controlled by the militants.”

On Wednesday the besieged militants called for an immediate five-day ceasefire but did not indicate if they were ready to withdraw as demanded by Damascus and Moscow.

In a statement calling for the truce, the militants made no mention of the several thousand fighters trapped in the city. Both Syria and Russia have said they want the “rebels” to leave Aleppo and will consider no ceasefire unless that happens, Reuters reported.

A resident in the city said the bombardment remains constant as the Syrians are applying pressure. “Any movement in the streets and there is bombardment (on that area) immediately,” said the east Aleppo resident contacted by Reuters, who declined to be identified.

“The decision to liberate all of Syria is taken and Aleppo is part of it,” Assad said in a newspaper interview, according to pro-Damascus television station al-Mayadeen. He described the city as the “last hope” of rebels and their backers.

The rebels have suffered a series of stinging losses in Aleppo over the past 10 days. Militant-held areas have shrunk to about a third of their former size, the WSJ reports.

On the current Russian-US talks, the diplomat said: “The assumption is that the US has influence on the ground. I don’t think that’s the case.” It means Syria will win the war against foreign supported Takfiris as will Iraq.

BerlinIn a risk analysis of Covid-19 rapid tests and PCR tests, Prof. Dr. Werner Bergholz came to the conclusion that all of the antigen test kits he examined contain several hazardous substances. Therefore, the "implementation is inevitably associated with risks for the health of the users and for their surroundings and the environment."

BerlinIn 2018, the President of the World Medical Association, Frank Ulrich Montgomery, rejected hand x-rays to determine the age of migrants, because this "interfered with personal rights". But forcing your own population to take an experimental injection is no problem for Germany's top vaccine Fuehrer.

NamurA court in Namur, an important commercial and industrial centre located in the Walloon industrial area in Belgium, has declared the use of the Corona passport in Wallonia illegal.

LisbonSocialist Prime Minister Antonio Costa last week announced that Portugal would return to the "state of calamity" on December 1 with reinforced measures to curb Covid-19 infections.

BernThe Swiss State Council for Health persecutes opponents of Covid passports and vaccinations, but are the members themselves vaccinated?