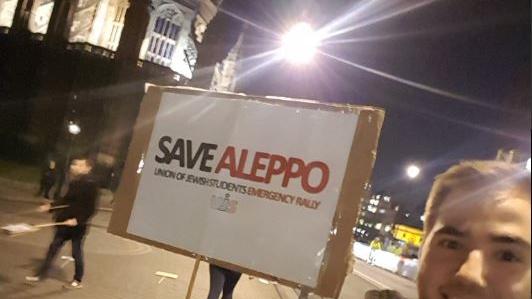 A crowd of Jewish students arrived at a protest organised by Syrians against president Assad in London on Thursday night, opposite the home of the Prime Minister in London.

The two sides had something in common: Invective for Syrian Army advances in Aleppo.

The Syrian organisers were furious at the cameras focussed on the Jewish students. “We’ll become linked! People will think we’re part of the conspiracy,” one of the Syrians told alaraby.co.uk.

Arab-Jewish relations have had a troubled history in the Middle East.

“There are many, many members of security services who are now very active in Syria,” Free Syrian Army Chief of Staff General Salim Idriss told CNN’s Christian Amanpour, hinting that the government of President Bashar Assad was incapable of controlling the borders. “Mossad is one of the most famous security services in the world and I don’t think they are away.”

In September 2013, Reuters reported that Israel wanted to see Syrian President Bashar al-Assad toppled. Its ambassador to the United States indicated a shift from its non-committal public stance on its neighbor’s conflict.

Even Assad’s defeat by al Qaeda-aligned rebels would be preferable to Damascus’s current alliance with Israel’s arch-foe Iran, Ambassador Michael Oren said in an interview with the Jerusalem Post.

Assad’s overthrow would also weaken the alliance with Iran and Hezbollah, Oren said.

His comments marked a move in Israel’s public position on the Syrian war, as Prime Minister Benjamin Netanyahu had long avoided openly calling for the Syrian president’s fall.

“The greatest danger to Israel is by the strategic arc that extends from Tehran, to Damascus to Beirut. And we saw the Assad regime as the keystone in that arc,” he said.

Oren, a Netanyahu confidant, then suggested that other anti-Assad rebels were less radical than the Islamists, but he did not want to give details in the interview on how Israel was promoting Assad’s fall.

Israel has never admitted to arming moderate Syrian rebels, who have been engaged in battle against the Assad regime and its allies since March 2011. In June, Brig. Gen. Itai Brun, head of Military Intelligence research, told the Herzliya Conference that 80 percent of Syria’s oppositionists are Islamists of various shades, indicating that Israel was reluctant to collaborate openly with them.

But Major-General Amos Yadlin, the director of Tel Aviv University’s Institute for National Security Studies (INSS) and former head of the IDF’s Military Intelligence Directorate, said ISIS was not a significant threat to Israel in the near future, and that it provided some strategic opportunities for Israel to cooperate with other states.

Some years later, Haaretz would reveal the existence of a study by the Jaffee Center for Strategic Studies, Tel-Aviv university, under General Aaron Yariv, former intelligence services chief, which outlined a “zone of hydraulic security”, which called for placing water resources in Syria and Lebanon under full Israeli control.