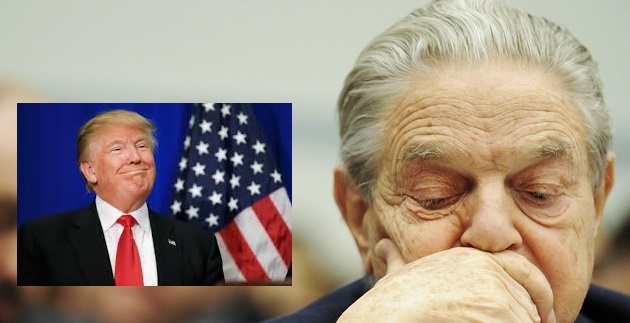 The stock-market rallied after Trump’s presidential election, contrary to what Soros had predicted. He had been all doom and gloom and his lack of realism has now cost him dearly.

The losses are a stark reminder of how hubris can punish the overly confident. Trump’s possible victory had many “experts” predicting a tumble for stocks in the wake of the election, but instead the Dow Jones Industrial Average has climbed 9.3 percent.

Last year, Soros returned to trading at Soros Fund Management LLC, which manages about $30 billion for Soros and his family.

Soros was cautious about the market at the start of November and became more bearish immediately after Trump’s election, hoping that his influence would carry enough weight to force the market down, but Trump’s policies to boost corporate earnings and the overall economy proved too strong for the Soros message.

As a result, some of his trading positions incurred losses approaching $1 billion, according to The Wall Street Journal. Soros has had to cut his losses.

The firm is currently interviewing candidates for a vacant chief investment officer position. In recent years, the billionaire has focused on public policy and philanthropy. He was a large contributor to the super PAC backing Democratic presidential nominee Hillary Clinton and has donated to other groups supporting Democrats.

While stock futures fell sharply on the evening of Trump’s victory, the market has since surged.

Soros, who is believed to have amassed a personal wealth of around $24.9billion, partially blamed too little communism for Trump’s rise in an interview with France24. “The lack of redistributive policies is the main source of the dissatisfaction that democracy’s opponents have exploited,” he said.

Once a self-proclaimed “avid supporter” of the European Union, Soros has now turned his back on the bloc saying that after the financial crash of 2008 what was once seen as a relationship of equals as been turned into one of “creditors and debtors” which is “neither voluntary nor equal”.

Germany was the main cause of the crash, according to Soros, for only serving its “narrow self-interest” to the detriment of those who rely on it.

Despite his stinging losses, Soros says he still has no faith in US President-elect Donald Trump, who he refers to as a “con artist and would-be dictator”.