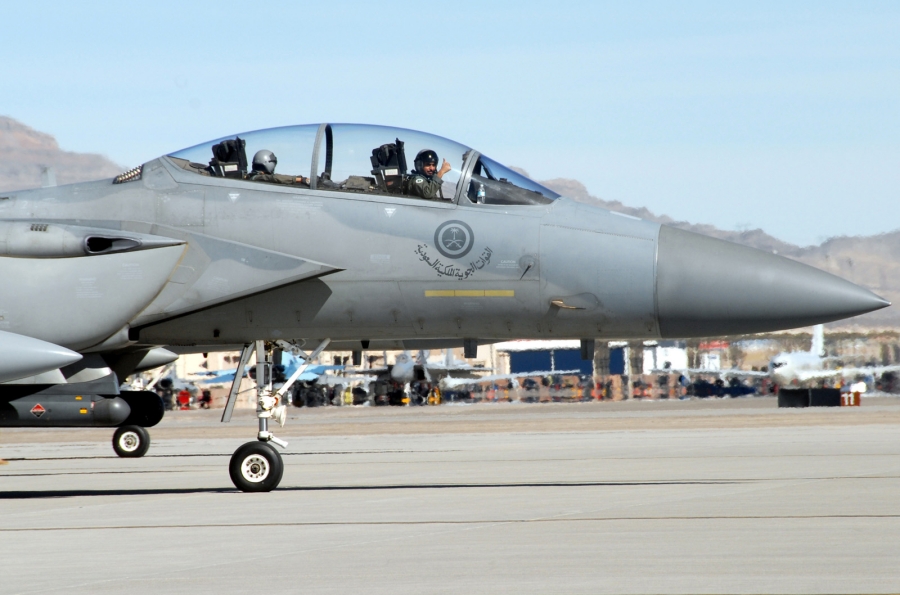 US selling hundreds of fighters to Middle East

In mid-December the first four F-15s to be delivered landed at King Khalid Air Base in Saudi Arabia. The model, the F-15SA, is custom made according to Saudi requirements and is the most modern version of the F-15 to date.

Among the upgrades are a completely new radar, equipment for digital electronic warfare that can jam enemy aircraft radar while blue force radar is protected, a new electronic flight control system (fly-by-wire), a sensor warning of missile launch, infrared search and tracking systems, a helmet mounted display system, better jet engines and an increased number of pylons from nine to eleven. Experts believe that the plane by far is going to be the best tactical fighter aircraft in the Gulf region.

Neither the US nor Saudi Arabia has officially confirmed the delivery, but it has been reported by flight enthusiasts who followed the planes on digital maps on the internet and even photographed them at a stopover in Britain. The news then spread through military online magazines like IHS Janes.

The total purchase includes 84 newly-built F-15SA and an upgrade of 68 existing F-15E, hitherto the most modern F-15 variant. The deal, which more than doubles the Kingdom’s fleet of F-15s, was concluded in 2010 for $29.4 billion. Deliveries will continue over five years. The acquisition also includes 13 000 precision-guided bombs.

Saudi Arabia is involved in a war with its southern neighbor Yemen, which despite Saudi Arabia’s total technical superiority has not developed as planned. Reports claim that the Saudi Air Force lacks qualified fighter pilots and largely has to rely on foreign mercenaries flying combat missions in Yemen. Many military experts now wonder how the Kingdom will man the new planes.

Overall, Saudi Arabia has another 200 modern fighter jets, including F-15C, the Eurofighter and Tornado.

Also in December the first two of the modern fifth generation F-35 combat aircraft were delivered to Israel, landing at Navtims air base, where they were met by Jewish leaders together with US Secretary of Defense Ashton Carter. Some 50 planes were ordered with a stated intention to acquire up to 75. The price tag is $110 million each.

The first F-35 on it’s way to Israel. Note that the plane still flies US markings, while there is a Israeli sign in the cockpit. Photo: USAF

Israel will be the first country after the United States introducing the F-35 into its air force. It has been named “Adir”, which means powerful. The aircraft is hailed as the world’s most advanced fighter plane and the Israeli newspaper Jerusalem Post writes that “Israel will now be able to attack places it formerly hasn’t had the ability to attack”.

Israel has insisted on installing its own electronics in the aircraft, as well as Israeli electronic countermeasures, something the United States first opposed but then accepted. The aircraft is also adapted for Israeli bombs and missiles, and the new version will be the designated F-35I.

The so-called purchase is fully paid by US taxpayers through the extensive annual aid to Israel. However, because the delivery of the F-35 is presented as a “purchase”, Israel has been able to require counter-purchases of the United States. Among other things, parts of the F-35I are manufactured in Israel. In September 2016 the US and Israel decided on a new agreement, which means a sharp increase in US funding totalling $38 billion over the next decade.

President-elect Donald Trump has been critical of the whole concept of the F-35, the cost of which he suggests has gone overboard.

In mid-December, the US State Department also approved of a major arms deal with Kuwait, intent on modernising 218 of its US-built M1A2 Abrams tanks. The deal is worth $1.7 billion and includes new weapons systems, nightvision and other equipment.

The UAE receives Syria’s Assad: Give peace a chance!

When John Lennon sang “Give peace a chance” in 1975, Syria was expecting a military rebellion by the extremist Muslim Brotherhood organization – listed as a terrorist group in many countries – whose goal was to overthrow the secular government in Damascus and establish a regressive state based on Sharia laws.