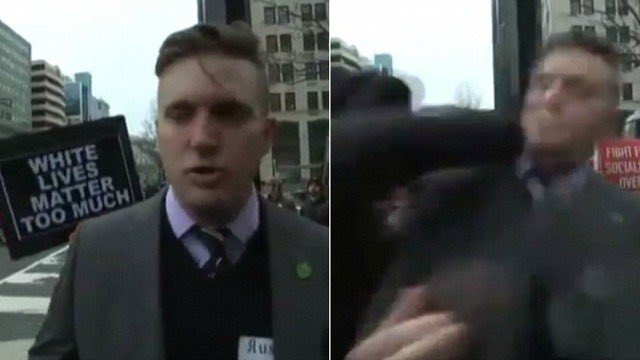 Anti-Trump protesters resorted to violence against white nationalists at Trump's inauguration, but it was their victim who trended on Twitter

Altright nationalist, Richard Spencer was assaulted by a paid Antifa-protester on Friday in Washington DC, while he was giving an interview to a group of journalists.

Spencer was in Washington to report on president Donald Trump’s inauguration as the 45th president of the United States. While responding to questions, a white villain in a black mask assaulted him.

The alternative media has been the only credible source of information about ongoing violent demonstrations, vandalism and hate crimes against Trump supporters. On Twitter #RichardSpencer trended as the number one news story.

Anti-Trump protesters were waving placards stating “white lives matter too much” during the attack on Spencer, captured on camera.

Molyneux remarked on Twitter that this violence against Spencer was also a defence of terrorism: “If you’re celebrating or encouraging the physical assault of someone due to their political positions – you are by definition pro-terrorism.”