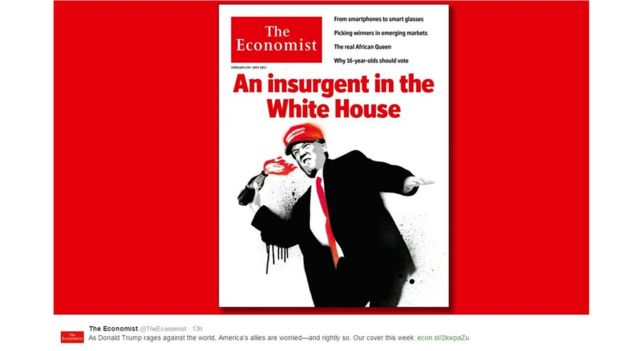 Leftists use covers and ads to incite violence against US president

Leftist rags are trying to sell their publications with over-the-top attacks on US President Trump.

Several magazines are using the front covers of their next editions to incite violence against the US president and his policies.

The Village has published a photograph of the president in crosshairs with the caption, “Why Not” with a main article suggesting that someone assassinate him. Dubbing itself “Ireland’s political and cultural magazine”, The Village is competing with other anti-Trump liberal rags for the title of violent, criminal and tasteless incitement.

“So what is to be done? We have one of the worst men in the most powerful position, one where he can do damage to millions, to billions, to the planet,” the writes asks. “So perhaps the solution is tyrannicide. As he might say himself – ‘take him out’” citing Greek and Roman history on political assassinations.

“Tyrannicide has had support from various philosophers and theologians through the centuries, including the ancient Greeks and Romans.”

Michael Smith, the editor of Village, tried to defend the title by maintaining that it was not a recommendation for assassination. “It’s not an incitement to anything. We’re politically correct, right-on, the last magazine that would recommend violence or killing anyone. Our cover is a provocation to think.” Smith did not explain however why he felt it fitting to publicly ponder assassinating a president.

But readers were not fooled. TJ McGibney remarked on Twitter: “You should be ashamed of yourselves. Shops and distributors should refuse to stock such blatant incitement to murder.”

German weekly magazine Der Spiegel on Saturday published a front cover illustration showing Trump as an ISIS jihadist beheading the Statue of Liberty, but the decision was criticised by the German media.

It depicts a cartoon figure of Trump with a bloodied knife in one hand and the statue’s head, dripping with blood, in the other. The caption reads: “America First”. The obvious parallel in the Spiegel depiction is with Jihadi John, who was seen in several videos showing the beheading of ISIS hostages.

The front cover image is not a new idea. It is actually similar to one that appeared on the front page of the New York Daily News in December 2015, also showing Trump beheading the Statue of Liberty but in a less gory fashion..

Die Welt said it “damaged journalism because it confirmed many people’s preconception that the ‘mainstream media’ does biased reporting and that many journalists prefer to promote their own worldview than be neutral witnesses to what is happening.”

German daily, the Frankfurter Allgemeine Zeitung, said: “The Spiegel cover is just what Trump needs – a distorted image of him which he can use to further his own distorted image of the press,” adding that such images show up the media bias against Trump, as “belonging to the establishment” which he is already up against.

Karl-Georg Wellmann, a lawmaker for Chancellor Angela Merkel’s CDU conservatives, sensing public outrage at the image, told German daily Bild: “I urge everyone to calm down and to handle this with reason, rather than gut feeling.“

Alexander Graf Lambsdorff, a member of Germany’s Free Democrats (FDP) and vice-president of the European Parliament, described the cover as “tasteless”. Lambsdorff said the cover said more about Der Spiegel journalists than Trump. “The cover plays on the lives of terror victims in a very nasty way,” he told Bild.

But while the Spiegel’s editor-in-chief rattled on about “democracy”, he did not comment when asked why the representation was intended to resemble beheadings by the terrorist group ISIS, the very group Trump intends to fight.

No one at the US embassy in Berlin was available for comment about the Der Spiegel cover.

British weekly The Economist, which has endorsed both Republican and Democratic presidents, pictured President Trump throwing a molotov cocktail.

Anheuser-Busch also got on the anti-Trump bandwagon to sell their Budweiser beer in a US Super Bowl advertisement. The ad is set to premier on US television when millions of viewers are watching.

Trump’s backers took to Twitter to chastise Budweiser for making their effort so openly political. “Budweiser sees no difference between white immigrant Adolphus Busch, and jihadis who would destroy America. I see the difference,” Paul Nehlan remarked.

A former US Secret Service special agent told Mashable that the agency was likely to look for repeated threats, specific details of any possible attacks, and other trends before taking action.

While Facebook and Twitter have policies to suspend accounts or take down violent or threatening, thousands of posts against Trump remain on both platforms.