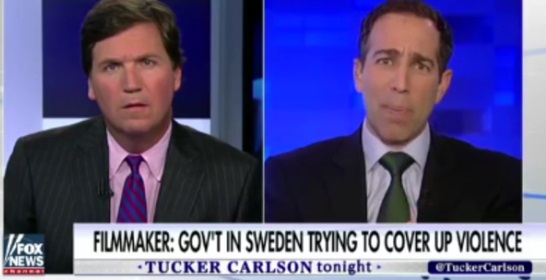 US President Donald Trump has used his favorite platform, Twitter, to explain the societal problems caused by immigration in Sweden.

The president tweeted: “My statement as to what’s happening in Sweden was in reference to a story that was broadcast on @FoxNews concerning immigrants & Sweden.”

In the Fox News documentary clip Trump was referring to, filmmaker Ami Horowitz states, “There was an absolute surge in both gun violence and rape in Sweden once they began this open-door policy,” referring to Sweden’s decision to open its doors to large numbers of refugees in 2013, the BBC reported.

Horowitz told Fox News people high up in the Swedish government are purposely covering up the prepretrators of rape crimes to protect “vulnerable” migrants.

During his campaign-style rally on Saturday, Trump pointed to incidents in Germany and Sweden in defense of his executive order on immigration and refugees — specifically referring to the Fox documentary the night before about Sweden.

The Swedish Embassy in Washington was so alarmed by Trump exposing the negatives regarding immigration, that it pretended not to understand Trump’s comments at his rally in Florida. Swedish government officials declared there had been “no terror attacks” in Sweden, ignoring the rape scourge tied directly to “refugees”.

But Horowitz highlighted the violence: “From the onset of the refugee crisis, there was a surge in gun violence and rape – the statistics were clear.”

Forty years after the Swedish parliament unanimously decided to change the formerly homogenous Sweden into a multicultural country, violent crime has increased by 300 percent and rapes by 1 472 percent. In 1975, 421 rapes were reported to the police; in 2014, it was 6 620. Sweden is now number two on the list of rape countries, surpassed only by Lesotho in Southern Africa.

According to figures published by The Swedish National Council for Crime Prevention, 29 000 Swedish women, during 2011, reported that they had been raped, suggesting that less than 25 percent of the rapes were reported to the police.

And in 2015, the proportion of rapes where the Swedish police actually found the suspect was 14 percent. In 86 percent of the rapes, the rapist got away.

The internet radio station Granskning Sverige called the mainstream newspapers Aftonbladet and Expressen to ask why they had described the perpetrators in rape cases as “Swedish men” when they actually were Somalis without Swedish citizenship. The mainstream Swedish newspapers were hugely offended when asked if they felt any responsibility to warn Swedish women to stay away from immigrant males. One journalist asked why that should be their responsibility.

Michael Hess, a politician from Sweden Democrat Party, was charged with “denigration of ethnic groups” [hets mot folkgrupp], a crime in Sweden after his comment on the rape epidemic. “When will you journalists realize that it is deeply rooted in Islam’s culture to rape and brutalize women who refuse to comply with Islamic teachings. There is a strong connection between rapes in Sweden and the number of immigrants from MENA-countries [Middle East and North Africa].”

In May 2014 Hess received a suspended jail sentence and a fine.

Hess has lived in Muslim countries and during his trial, he provided evidence of how sharia law deals with rape, as well as statistics to indicate that Muslims are vastly overrepresented among perpetrators of rape in Sweden. However, the court decided that these facts were irrelevant:

A 1996 report showed that immigrants from North Africa (Algeria, Libya, Morocco and Tunisia) were 23 times as likely to commit rape as Swedish men.

In 2002 it emerged already, that 85 percent of those sentenced to at least two years in prison for rape in Svea Hovrätt, a court of appeals, were foreign born or second-generation immigrants.

Sweden is now the fastest growing country in Europe as a result of immigration, but Swedish law forbids registration based on people’s ancestry or religion. Gang rapes, unknown in Swedish criminal history, is now part of the crime scene, but no studies have been done about it.