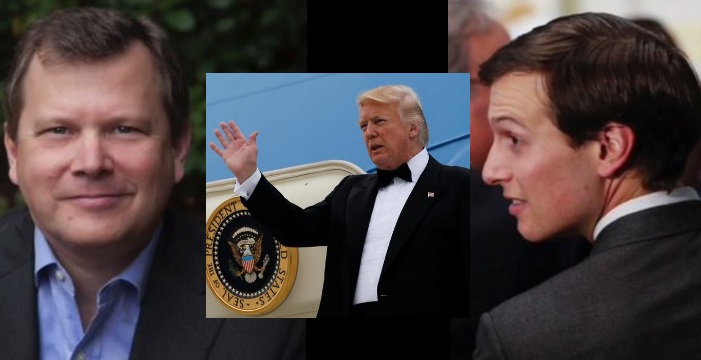 Kushner is a ‘massive, massive problem’ for the White House

The American author of a best-selling book about the Clinton's dark secrets, believes president Trump's son-in-law Jared Kushner has created "a massive, massive problem " for the White House.

Kushner’s hidden ties to interventionist billionaire George Soros and investment banking firm Goldman Sachs was the subject on an investigative report published recently by the Wall Street Journal. According to Schweizer there are still more salient facts to be uncovered. “I think these are all legitimate questions that people have a right to ask, and to want to know. And yet, it’s kind of shrouded with mystery.”

In a radio interview Schweizer said that Kushner’s ties to Soros — who funds a network of left-wing political activists — as well as his billion-dollar loans, both of which he failed to include in his financial disclosure forms, present a “massive, massive problem” and called for an independent audit of Kushner’s finances, suggesting that they likely contain similar bombshells.

“He [Kushner] is now the sort of go-between, between President Trump and people like Goldman Sachs and/or George Soros that might have business in the White House,” Schweizer said. “These are people he does business with, and has commingled assets with. The American people need to know, and for a campaign that I think ‘draining the swamp’ and transparency were such important issues, this circumstance I think demands that kind of response.”

He expressed concern over the fact that almost nothing is known about Kushner’s political views and aspirations and he has never been the subject of public scrutiny despite his powerful position in the White House.

“On a scale from 1 to 10, I would put this at a 7,” Schweizer told SiriusXM host Alex Marlow’s request to rank the seriousness of this transparency transgression. Breitbart News Daily airs on SiriusXM Patriot 125.

He likened Donald Trump to a second-hand car salesman and said Trump should “lift the hood up from the car and see what kind of engine is underneath there — to see really what his views are, have him do some public interviews about what his positions are.”

Schweizer said that an independent investigation into Kushner’s dealings was overdue because the shoddy nature of the statements he submitted. “There needs to be somebody independently that goes in and looks through his assets to make sure that there aren’t other big conflicts that are undisclosed lurking,” he said.

Schweizer also suggested that Kushner’s ommissions might have been deliberate. “The problem is, you really can’t have confidence in whoever prepared these forms for Jared Kushner because you’ve got these gaps. I would be surprised if there aren’t more of these kinds of mistakes or omissions, because it just seems to me this one is so big and so glaring, it’s hard for me to believe that it was just an oversight, and it’s hard for me to believe that this is the only one that exists.”

Kushner, who is married to President Trump’s daughter, Ivanka, failed to disclose his business ties to George Soros, Goldman Sachs and other billionaires through his real estate start-up company, Cadre. Soros also reportedly opened up a $250 million line of credit to Kushner to help get Cadre off the ground.

“This is a company that not only is Jared Kushner an investor in, he co-founded in 2014,” Schweizer told Breitbart radio. “So this is not some passive investment that one of his advisers said to put money into, and was forgotten about. He co-founded it. It’s a real estate tech startup. Obviously it has a lot of ambitions. He’s got a lot of money in it, and he failed to disclose it on his financial forms.”

Because of the size of the loan, Schweizer believes it is highly unlikely that Kushner had not been aware of it and his unique position within the Trump administration is another added concern: “He’s not in charge of protocol. He’s not in charge of public outreach. He is basically the go-between with the business community, so he is ground zero for precisely the kinds of concerns and issues that one might have about very, very troubling financial transactions,” Schweizer noted.

Soros is one of president Trump’s most virulent critics and spent millions trying to defeat Trump during last year’s US election. He has vowed to continue to support the anti-Trump cause.

Kushner has enormous clout in the White House, and his influence is steadily increasing. The 39-year-old has no diplomatic credentials, yet he serves as the president’s lead adviser on key relations with no less than China, Mexico, Canada, and has now been tasked with resolving than the bitter Israeli-Palestinian conflict, something that eluded most hardened statesmen.

Donald Trump hasn’t visited Iraq yet, and neither has Secretary of State Rex Tillerson, but Kushner was recently sent as the emissary to Iraq’s government and meetings with top US generals. Remarkably Kushner now has a nearly limitless portfolio of delicate foreign affairs matters to attend to, while his public office experience can be measured in hours rather than days, that is the hours he has spent with George Soros.

“Every president has advisers that have input, that offer insight, but those advisers – whether it’s Trump or Obama – generally there’s a good public knowledge about them, because they serve them during the campaign. They’ve been public officials, or outspoken on issues in one way or the other,” Schweizer told Breitbart. “Jared Kushner has not. During the campaign, he said very, very little publicly. Before that, in terms of his politics or his policy views, very, very hard to discern. And he, in a sense, kind of emerges out of nowhere to become this very powerful figure in the Trump White House.”

Since winning an internal war early on over campaign manager Corey Lewandowski, and later Steven Bannon, insiders say Kushner has zoomed in on getting rid of Sebastian Gorka, labelled by Quartz as “the unrepentant racist and nationalist”. Gorka is reportedly still in the White House but no longer has any influence as he has effectively been sidelined by Kushner because of his ties to Hungarian president, Viktor Orban.

An official close to Steven Bannon told The Daily Beast previously, “Steve thinks Jared is worse than a Democrat, basically.”

According to Schweizer, “the whole purpose of disclosures – whether you are asking the Clintons to do it, Barack Obama to do it, Jared Kushner to do it, or Mitch McConnell to do it – is so the American people can know: who are they financially dependent on, who do they have ties to, who might have leverage over them?”

Schweizer repeatedly stressed the seriousness of the transparency issue for the Trump administration: “Who is actually making the decisions? You really can’t fire a family member per se. They’re going to remain your family member. So it creates a different kind of dynamic and environment, that somebody can’t just be told to go away if they make a massive mistake or engage in destructive behaviors. It presents a unique challenge.”