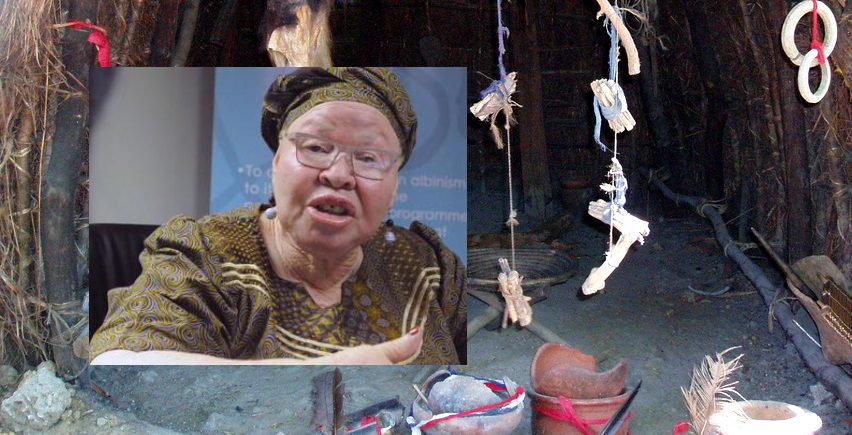 Africans with albinism are persecuted across the continent. The African Union and SADC have been urged to do more on their behalf, but a campaign launched last year to try and put an end to the crisis, have been met with total indifference.

The recent murder of an albino man in Kokstad, in the black area of the Eastern Cape, made no headlines. Esethu Jakuja’s mutilated body was found outside Bizana in the after he was reported missing on February 25 from his home in Shayamoya.

His mother Nyameka Jakuja said her son’s head and hands were missing and his stomach had been cut open for “traditional medicine”, or African voodoo.

Africans that FWM interviewed about albino body parts being used in potions, shrugged and denied that it was the case. They all defended witchcraft instead.

While lone voices condemned the murder of albinos, and added the myth that albino body parts can bring success and wealth is not true, the gruesome murder had created no stir in the African media environment.

“People must pray to God for success and must not believe that killing people will make them prosperous. Jakuja was a humble person when he worked at Checkout in Kokstad. His humbleness always brought tears to my eyes because I had never met someone that down to Earth,” a Muslim preacher said who had buried him.

Similarly, the murder of an albino woman, a 20-year-old from KwaZulu-Natal, touched very few black South Africans. The badly mutilated remains of victim Thandazile Mpunza, were found in a shallow grave last August.

It is suspected too that she was murdered for witchcraft purposes because of her albinism. Because of their white skin, albinos are threatened to become victims of cruel ritual murders. A wide-spread superstitiousness claims that an albino’s blood contains magical powers and their body parts are said to be talismans.

The Commission for the Promotion and Protection of the Rights of Cultural, Religious and Linguistic Communities (CRL) commented on the murder, suggesting that wildlife protection stories in the news prevented black people from being informed about albinism.

Ordinary Africans generally frown on wildlife protection, because of their love of “bush meat“. Liberia’s forestry authority said poachers have overrun the country’s national parks and are killing elephants, chimpanzees and other protected species.

A New York Times exposé noted that “albinos try to avoid leaving their houses. Children avoid school and walking alone. Everyone is a threat”.

Biligir Mariano, 26, who lives in Tete, Mozambique, with his wife and 9-month-old son, on Christmas Day in 2015, learned that one of his friends planned to kidnap and sell him. “It is the fault of the healers who pass on information that our organs are worth money,” he said of the dangers albinos face.

South African CRL Commission Chair, Thoko Mkhwanazi-Xaluva, said last year, “We need to say as Africans we need to say not in our continent, you can’t continue with this thing here and as a continent we need to protect people with albinism.

Last year, a KwaZulu-Natal teenager was sent to prison for arranging the murder of his albino girlfriend for body parts. The court heard that traditional healer Bhekukufa Gumede told the youngster that “muti [black witchcraft potions] mixed with the body parts of a person with albinism would make them rich”.

The black teenager had his albino girlfriend murdered so that he and his friends could mix her body parts with muti in a bid to get rich, said KwaZulu-Natal National Prosecuting Authority (NPA) spokeswoman Natasha Ramkisson-Kara.

He was sentenced in the Mtubatuba Regional Court to 18 years in prison, the third black person to be sentenced for the murder of 20-year-old Thandazile Mpunzi in the Empangeni/Richards Bay area, in the north eastern part of the country.

Two 19-year-olds, Mandla Mabuza and Lindokuhle Khumalo, pleaded guilty to murder and were sentenced to 20 years imprisonment. Gumede, Mabuza, Khumal, and the teenager then concocted a plan to kill the albino girl in a bid to obtain her body parts.

He had lured his girlfriend Mpunzi on the afternoon of August 1 2015 to an isolated spot in the Phelandaba area of Emanguzi in northern KwaZulu-Natal. Mabuza and Khumalo attacked Mpunzi and strangled her before her body was taken to a nearby forest.

According to the indictment, “the assailants [Mabuza and Khumalo] met on the following day and dismembered the deceased’s body. They took away certain body parts. At a later stage the assailants moved the remains of the body to another forest where it was buried. They were using the vehicle of accused one [Gumede]”.

Mpunzi’s mother had told the court she now feared for the safety of two other of her children who also have albinism.

Nomasonto Mazibuko told the Zululand Observer, that the Albinism society supported the ‘Stop Killing Albinos’ campaign but that they would work closely with “traditional healers”, as African witch doctors are called, to try and save the tarnished reputation of voodoo. “When we have engaged with the traditional healers, as [a] society we know that not all traditional healers are involved in such crimes,” said Mazibuko.

Black radio personality Kuli Roberts commended the initiative, but took issue with the name of the campaign saying that it was “insensitive” to say “albinos” when they were people with albinism. “If we change the way we speak, we will reach our goal quicker,” said Roberts.

She recalled how she heard the myths associated with albinism when she was growing up in black areas, but it wasn’t until four years ago that she realised that the problem was still rife in Africa. She said black people, especially, have a responsibility to end such crimes. “No other race kills their own. We can’t live like this,” said Roberts.

AFP reported in June last year that hostility for people with albinism was a particular problem in Africa, and Canadian charity Under The Same Sun found that 457 attacks on albino people, including 178 murders, in 26 African countries had been committed, mostly over the last decade.

The figure is far higher, analysts suggest, because albinism is not noted on police crime dockets.

Mazibuko confirmed that they did not have the exact number of attacks on albino people, as she said not all cases are reported. She said the society only knew of two cases this year, both of which were reported in KZN. The society had found that in South Africa, there seemed to be more cases reported of children going missing, she said.

KZN police spokesperson Lieutenant-Colonel Thulani Zwane said there was no increase in attacks on albino people in the province and the two albino children that have been reported as missing, both from Mkhobosa, Esikhaleni, and are still being sought by police. Sibusiso Nhatane went missing in June 2011 and four-year-old Maneliswa Ntombela went missing in June this year.

While searching for Ntombela, the Empangeni Family Violence, Child Protection and Sexual Offences Unit members followed information that a woman was allegedly arranging to sell an albino child for R100 000 to a traditional healer at Emanguzi. The suspect was arrested in July this year and charged for human trafficking.

Zwane said there was only one case of a woman who was murdered in the Emanguzi area. “We need to protect the children with albinism from being killed or trafficked for whatever reasons,” she said, but could give no details on efforts to curb the assaults on albinos.