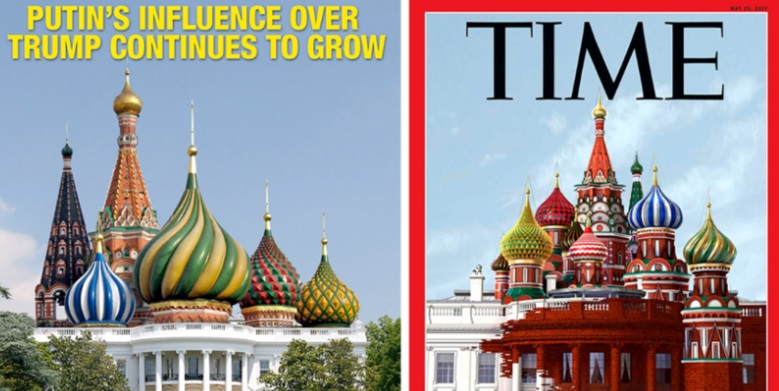 Anti-Russian fever in US becomes retarded

The United States is in great danger of being overtaken by the Russian Orthodox Church, according to Time magazine.

At least, that is what the an image of the White House meshed with the iconic St. Basil’s Cathedral in Moscow, on the weekly’s cover suggests.

The idea was stolen from the satirical publication MAD, it said in an online post Thursday that showed the cover images side by side.

Mad’s cover from Dec. 12, 2016, appeared with the caption “Putin’s Influence Over Trump Continues to Grow,” and showed the famous domes of St. Basil’s topping the White House.

Time magazine’s May 18, 2017, cover, which lacks any caption, is shown for comparison, depicting the White House seemingly morphing into St. Basil’s, but in the article, rants about the “Kremlin”. The Christian crosses atop St Basil are strangely missing too.

Are Time editors that stupid? The magazine is making a clear reference to President Trump and the federal investigation into Russia’s alleged tampering in the 2016 presidential election, and not the church. Why depict the church then?

Once a functioning Russian Orthodox Church and formally named The Cathedral of the Intercession of the Virgin by the Moat, the building is popularly called St. Basil’s. One service a year is held in the Cathedral, on the Day of Intercession in October.

St. Basil’s was seized by the Soviet government in 1923 and is today a museum. Contrary to popular belief, it is not part of the Kremlin complex.

Mad magazine mocked the paranoid and misinformed Time cover with the “Kremlin theme” suggesting “Russian operatives meddled in the 2016 presidential election that saw Donald Trump swept into the White House”.

Liberal Americans in the media also thought Time was going with a “Kremlin” motif, and they reported as much on social media, exhibiting their ignorance. St. Basil’s Cathedral, which is located in Moscow’s Red Square, is near the Kremlin, but not the Kremlin.

Newsweek has been competing with Time for over-the-top, low-grade anti-Russian propaganda. According to Newsweek, “Russia is a mortal threat” even though it has attacked no nation.

“Russia is a mortal threat to all the West holds dear, and it attempted to intervene, largely through cyberspace, in the 2016 election. America’s most prized possession—its democracy—was attacked in what McCain, speaking for much of the Washington establishment, called ‘an act of war’.”

The Independent praised Time’s “striking cover” of the “Kremlin” too.

But CNN’s coverage was the most retarded. It first ranted about the “Kremlin” but after discovering the error, suddenly changed its headline to Russia’s “minarets”, as if the church was some Muslim structure.

Awkward. CNN quickly realised it had gotten a little confused about what a 'minaret' is… pic.twitter.com/9yE0tep0qh