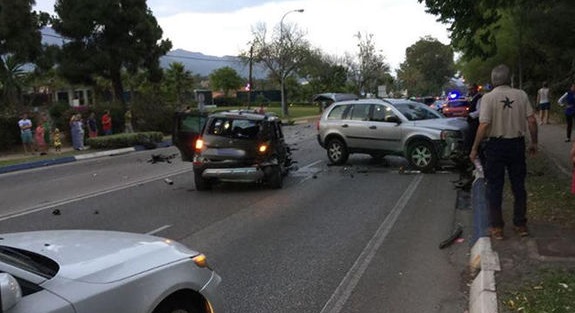 Eight people were injured when a car ploughed into a crowd outside a club in Marbella, Spain. Pedestrians outside the Ocean Club near the beach in the popular tourist hotspot were hit.

Police say the British driver was believed to have been under the influence of alcohol, and the incident is not terror related.

But in February this year, a British government report warned of “direct threats” to Spain issued by ISIS.

According to The Daily Star, the report reveals that the terror group, which operates out of Syria and Iraq, has ramped up its campaign to hire Spanish translators, suggesting plans to attract Spanish-speaking foreign fighters.

David Videcette, a former British Met Police counter-terrorism officer who investigated the 7/7 London bombings, told The Daily Star: “It’s very possible there could be an attack in Spain.

“When you think about it Spain is one of the few countries in Europe that hasn’t had a major attack in recent years.” Videcette said Spanish resorts are particularly vulnerable to a truck attacks due to their wide-open seafront promenades which have daily lorry deliveries coming and going unnoticed.

“They may well be looking to attack specific countries with tourists,” he added. “It’s very possible Costa Brava, Costa Del Sol, those sort of places could be on someone’s target list.”

He said attackers using low-tech weapons such as “knives or cars” would give little to no warning before they launched a terror raid. The random slaughter of 29 Christians on a bus in Minya Egypt by ISIS recently, also shocked the world.

Daily Star Online revealed ISIS have now set their sights on the US with a new wave of propaganda calling for attacks on hospitals, churches and banks.