CNN has been caught staging news in the wake of the Islamic State terrorist group claiming responsibility for the deadly attack in the United Kingdom capital of London.

CNN’s Becky Anderson was seen in London handing out props to a “peace group” to hold up for the camera. The deliberate staging of news was caught on video by a bystander, who posted the footage to his Twitter account @markantro.

The news team even handed out ready printed out papers and props and instructed the group before they were filmed. The footage was then passed off as real news by CNN.

According to @markantro, white police officers were made to leave and were replaced by Asian law enforcement for the filming, but left soon after the scene was filmed.

The BBC used the same staged footage from CNN in their own news report in the wake of the terror attack. Katie Hopkins, British radio personality, contacted the head of the BBC News, James Harding for comment, but has received no answer yet. The BBC also refused to air tape of terrorists saying “This if for Allah”.

According to Hopkins, the same group has been used in multiple locations to stage news. She suggested that they were “for hire”.

A journalist from the leftist newspaper, The Guardian, tweeted during the attacks that he had been “laughing” as others were being stabbed and slaughtered, but @OwenJones84 quickly deleted his post. Owen Jones said on Twitter: “Currently in a pub in central London, full of people laughing and chatting. No one is scared or cowed.”

According to local authorities, at least seven people were killed and 48 more injured. A total of 12 suspects, including four women, have been detained over the attacks.

A trauma doctor who operated on 12 victims of the terror attack said many were so shocked could not speak as they arrived at the hospital.

The doctor in charge at the Royal London hospital in Whitechapel told The Independent the victims were only able to sit and stare as they were being treated by medical staff. He said all of them had been badly injured in the van and knife attack.

On Saturday, at 22:08 local time (21:08 GMT), a vehicle struck unsuspecting pedestrians on London Bridge and continued on to Borough Market, where the suspects started stabbing innocent victims at the market. The attackers were confronted by the police and shot dead.

The US President Donald Trump has hit out at Mayor of London Sadiq Khan after the London Bridge terror attack, criticising “political correctness” in his comments on Twitter after the killing spree in the British capital.

The Muslim mayor of London, Sadiq Khan had caused an outrage when he tweeted: “There’s no reason to be alarmed,” as Londoners would see increased police presence over the course of the next few days.

In a series of tweets president Donald Trump took issue with the Mayor’s tweet that there was “no need to be alarmed”.

“We must stop being politically correct and get down to the business of security for our people. If we don’t get smart it will only get worse,” the US President tweeted.

“At least seven dead and 48 wounded in terror attack and Mayor of London says there is ‘no reason to be alarmed’!” another of Trump’s tweets read.

The US President also pointed out in a tweet that the attack did not feature firearms, in a clear rebuke to American gun control fanatics: “Do you notice we are not having a gun debate right now? That’s because they used knives and a truck!” 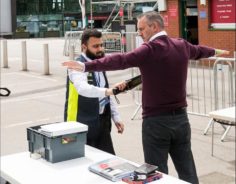 In May, Khan had tweeted: “Trump’s ignorant view of Islam could make both our countries less safe. It risks alienating mainstream Muslims. London has proved him wrong.”

There were reports of ISIS sympathizers praising the efforts of the three terrorists involved in the deadly rampage even before ISIS claimed responsibility.

The BBC’s security correspondent Frank Gardner said propaganda material was shared on the instant messaging service Telegram earlier this year, and the call to kill had been shared widely in recent weeks as the Muslim holy month of Ramadan approached.

According to the BBC, supporters of so-called Islamic State have been celebrating the London attack “all through the night – even before any claim has been made by ISIS”.