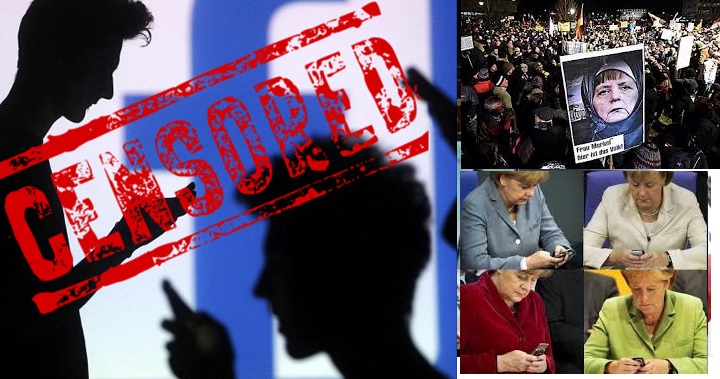 A German Facebook user has been fined 1 350 euros by her government after she shared and liked an anti-migrant joke on her Facebook page, according to the German newspaper Berliner Morgenpost.

Jutta B. is one of a growing number of people charged for “hate speech”. The Berlin resident from Lichtenberg was arrested and her home was raided by police after she shared a picture on Facebook.

A 52-year-old computer scientist who complained that German police were letting migrant shoplifters go, a 66-year-old who handed out leaflets that read “refugees go home”, and a couple who created a Facebook group called the “anti-refugee movement” were all fined too, Breitbart reported.

The picture Jutta shared, titled “Do you have anything against refugees?” included negative comments about migrants. The prosecution said her action was “an utterance capable of inciting hatred and denigration of the human dignity of others”.

Facebook has since banned Jutta’s account, even though she said she had liked and shared the picture in question without fully reading the content. “I like to pass on funny things”, she told the court.

The post included number of possible answers, such as: “Yes, machine guns and hand grenades”, and had been viewed and shared by a some 500 people, including the one who had reported the 62-year-old Jutta to the police.

Jutta has already received three death threats from the left-wing extremist group Anti-Fascist Action, or Antifa, in Berlin. The “autonomous communities” of Antifa often illegally squat in buildings, riot and war with police.

Hate speech in Germany has become an important issue for Angela Merkel’s government since the beginning of the migrant crisis in 2015. German police have already raided dozens of homes for alleged “hate speech”, ranging from glorifying Nazism to “xenophobia”.

After some 60 homes were raided, Interior Minister Thomas de Maizière justified the extreme police actions by declaring that “violence, even verbal violence, in any form and in any context” was “unacceptable”.

The controversial decision by Merkel’s government to appoint a former member of the infamous Communist East German Stasi to police social media, has been met with indignation.

Identitarians dressed up in old Stasi uniforms and posted the former Stasi logo on the doors of the foundation’s office where former Stasi agent Anette Kahane runs the Amadeu Antonio Foundation.

During the Cold War, East Germans had their private letters opened by communist authorities, and passages deemed to be out of line with the communist orthodoxy, were blacked out.

In April the Justice minister said that the companies offering online platforms are responsible for removing hateful content. He said a new bill would “intervene only when criminal hatred or intentionally false news are posted”.

The minister had complained that social networks don’t delete enough punishable content, citing research that he said showed Twitter deletes just 1 percent of illegal content flagged by users, while Facebook deletes 39 percent, the Associated Press reported. “We need to increase the pressure on social networks… There is just as little room for criminal propaganda and slander [on social media] as on the streets,” said Federal Minister of Justice Heiko Maas.

But what is “criminal hatred”? Clearly German authorities mean opposition to their policies regarding Muslim migration. Germany feels that the rest of Europe should follow their example: “In the end, we also need European solutions for European-wide companies,” said Maas.

Statements that are deemed illegal under German law are now being conflated with statements that are merely deemed, subjectively and on the basis of entirely random complaints from social media users to be “hate speech”.

Posts critical of Chancellor Merkel’s migrant policies, for example, can be categorized as “Islamophobia”, and are often found to violate “Community Standards”, while incitement to actual violence, is generally considered as conforming to Facebook’s “Community Standards”.

Facebook, meanwhile has announced that by the end of 2017, the number of employees in complaints-management in Berlin will be increased to more than 700.