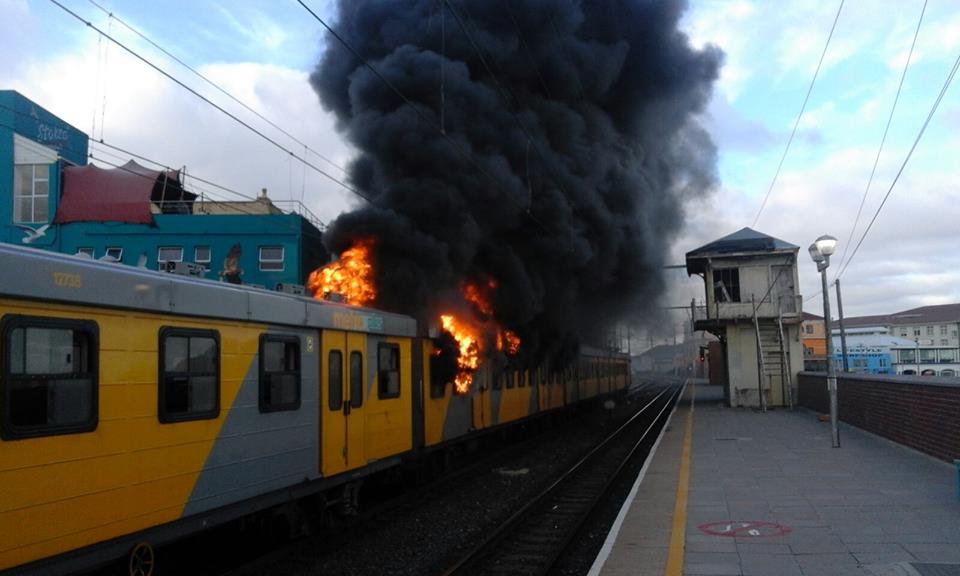 Black commuters in South Africa have a long history of burning trains and rioting in stations, often on the flimsiest of pretexts.

The newly appointed CEO of the Passenger Rail Agency of South Africa (PRASA), Cromet Molepo, said on radio last week that his organisation was “losing 80 coaches per week due to arson and vandalism”. Not only is PRASA in a crisis due to corruption and financial mismanagement, but its mainly black passengers are also attacking trains in an astonishing display of destructive rage.

On 9 May this year, the country’s president Jacob Zuma, appealed to commuters not to burn trains. “We have experienced shocking incidents in this country where people burn trains because they arrived late at the station and made them late for work. That is too drastic and is totally unacceptable. As we hand over such infrastructure, we appeal to our people to handle it with care. These are your trains. Look after them so that they can carry you for many years to come.”

He was speaking on the occasion of launching a new Metrorail service in Pretoria, known as the “People’s Train”. However, since his appeal to rail passengers, arson and vandalism have continued unabated.

A month ago on 20 November, Riana Scott, a spokesperson for Metrorail, a subsidiary of PRASA, confirmed that 70 whole trains with many coaches were vandalised every month. Reacting to the setting alight of a train in Cape Town, Scott said the Century City line in Cape Town had to be temporarily closed down after an arson attack.

“The fire brigade arrived on the scene within minutes and started dousing the flames immediately‚ after Transnet Freight Rail (TFR) switched off the overhead power. The railway line is currently closed until the flames have been doused and infrastructure assessed for any fire damage,” Riana Scott said in a statement at the time.

In October 2017 Scott revealed that 101 trains had been rendered non-operational since 2015. The cost to replace the trains stood at R312-million‚ she said. What is worse, is that the PRASA workshops where the trains are supposed to be repaired, were also being stripped of their copper wiring by copper thieves.

Sometimes electricity thefts on railway lines cause train delays, after which the black commuters would riot and even burn down stations. On 19 February 2001 the historic Pretoria Station building, designed by Sir Herbert Baker, was completely destroyed in a fire caused by rioters. It cost R18 million to rebuild and restore.

However, in March 2013, the leader of protesting black railway commuters, Albert Mokoena, decided not to burn down the station once more, but threatened to set the modern Gautrain serving the Johannesburg airport alight. Mokoena told a deputy director general in the transport department, Maria du Toit, that unless their demands were met, they would burn the Gautrain:

“Before March 28 you must have responded to our demands. We have resolved amongst ourselves that it is really not good for us to burn our own trains [the Metrorail trains]. We are going to burn the Gautrain,” he said outside the Bosman railway station in Pretoria.

“I know that I am on record and I am doing this deliberately. It would be useless for us to burn our own property, but that Gautrain is not for us, it’s for the rich people. It is for the bourgeois,” Mokoena said to cheers of approval from the crowd.