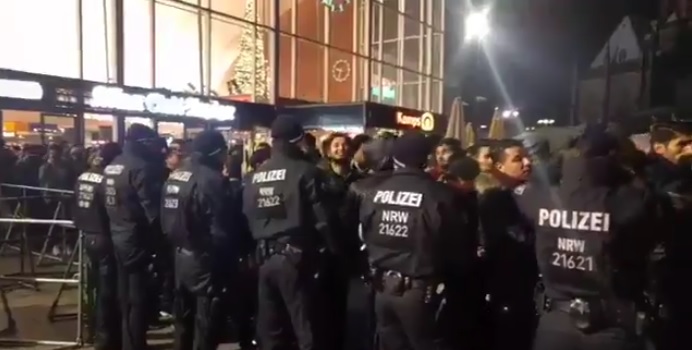 At least 13 cases were reported to the police and seven suspects were arrested in the German capital. Police however refused to provide information about the ethnicity or the nationality of the perpetrators.

Before the event, a Berlin NYE party organiser announced that a special safety and protection zones were created for women who experienced sexual assault or sexual harassment.

Around midnight, Berlin’s police tweeted that they had received the first reports of sexual assaults.

The special “safe area” for harassed or sexually assaulted women stood empty most of the time and was barely visited. Only four women took refuge in the Red Cross tents with health care professionals and security personnel on standby.

The setting up of the “safe area” for women was heavily criticised by a German police union leader. He said it was communicating a “devastating message”.

“By doing so, one is saying there are safe zones and unsafe zones” for women, a message that could result in the “end of equality, freedom of movement and self-determination”, he said.

The Minister of the Interior of the state of North Rhine-Westphalia, Herbert Reul, had advised women to visit New Year’s Eve celebrations only in groups.

North Rhine-Westphalia is the most populous state in Germany and Cologne is its largest city. During New Year’s Eve 2015 – 2016, at least 500 women were sexually assaulted in Cologne, by 1 400 mostly migrant men.

The 65-year-old CDU politician said about this year’s celebrations: “I would say to my three daughters: If possible, do not go alone, but in groups… When it starts to get dangerous, you make a loud noise and if all this does not help, call the 110 as soon as possible – rather too much than too little.”

Reul assured that the state’s police have made the necessary arrangements to enable safe New Year’s Eve celebrations. Everything would be done to prevent the situation that happened two years ago, the minister said.

BerlinA few days ago, well-known professors from all political backgrounds in Germany denounced the increasing loss of academic freedom in research and teaching in a manifesto and joined forces in a network. The real question is, how could restrictions on knowledge possibly have come this far? Prof David Engels, a Professor of Roman History in Brussels and the Poznan West Institute (Instytut Zachodni) commented on the new manifesto.

BerlinMeteorologists in Europe are assuming heavy snowfall that will affect all of Germany by the end of the month. These predictions go against the "models" of climate alarmists.

Council of Europe: No compulsory vaccinations and no discrimination against the unvaccinated

BrusselsOn 27 January, the Council of Europe signed Resolution 2361, which states that vaccinations in EU Member States should not be mandatory. Furthermore, persons who have not been vaccinated may not be discriminated against in any way. This effectively stops the notion of "vaccine passports".