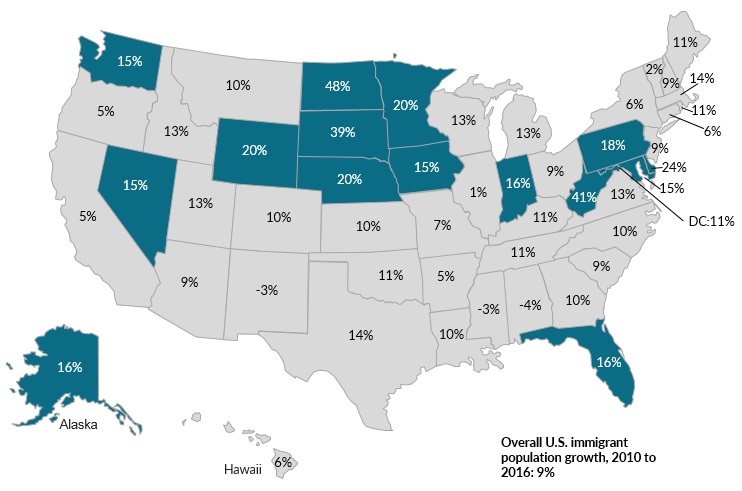 States where many Americans no longer speak English at home. Map from MPI

Almost quarter of US speak no English at home

Some 13.5 percent of the US population - 44 million - is foreign born, the highest level ever, and many of them are not proficient in English. Mexicans and Cubans dominated the influx, followed by those from India and China.

A report from the Migration Policy Institute found that 22 percent of the US population does not speak English at home, instead choosing to speak Spanish at home.

Spanish was in fact the top non-English language spoken at home in the country overall and in the 15 fastest-growing states with one exception: Alaska, where Native American languages predominated.

The share was highest in Nevada at 31 percent and Florida at 29 percent, also revealing a new trend where immigrants to the US are dispersed throughout the country instead of concentrated in a few states and cities.

Around 45 percent of foreign born immigrants aged 5 and older in these states reportedly spoke English less than “very well,” thus classifying them as Limited English Proficient (LEP), meaning roughly half of all immigrants to the United States.

Limited English Proficient refers to those who reported speaking English “not at all,” “not well,” or “well” on the ACS questionnaire. Immigrants claiming to speak “well” are not considered fluent speakers.

“Approximately nine million immigrants, or one in every five, reside in these 15 states,” according to the report. The 15 states were home to about 1.7 million illegal immigrants in the 2010-14 period, or about 15 percent of the 11 million unauthorized population in the United States.

At the national level, the next four languages spoken at home were Chinese, Tagalog, Vietnamese, and Arabic.

Residents of Minnesota, where many refugees have been resettled in the past few decades notably, reported speaking Hmong and Vietnamese, as well as a host of African languages including Beja, Somali, Swahili, and Kru.

Florida is the top state for Haitian immigrants, and it is therefore not surprising that Haitian Creole was the second most common non-English language spoken in Florida.

Immigrants in Nebraska are less likely to be educated, the report revealed, with 44 percent lacking a high school diploma compared to 29 percent of the overall foreign born.