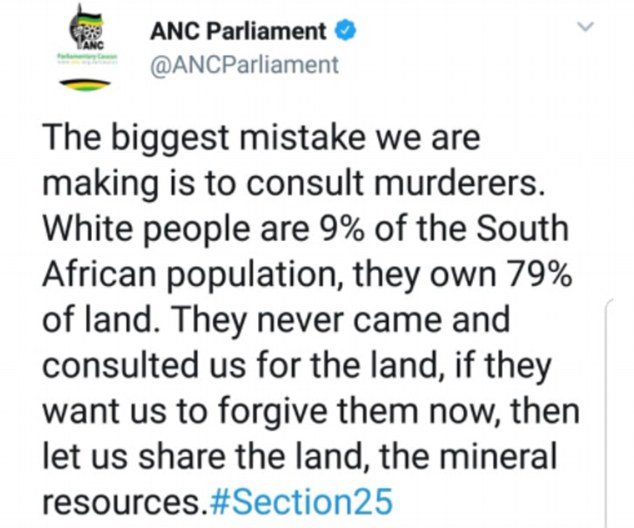 The offending tweet by the ANC, accusing whites of

The ANC, the ex-terrorist movement ruling South Africa, is increasingly turning its sights on the country's white minority, with its Zimbabwe-style land confiscation policy.

South Africa’s ruling group, the ANC, has called all white people in the world “murderers” while preparing to confiscate the first 140 white-owned farms in a Zimbabwean-style land grab. The offending tweet from the party’s official @ANCParliament account, has since been removed but has led to an outcry in the country as it represents a new low-water mark in the ethnic rhetoric directed against farmers and white people generally (see image). Both the ANC and the EFF, headed by former ANC Youth League leader Julius Malema, have adopted a race-based “Africa-for-the-Africans” ideology by which everyone of European descent is deemed an alien or interloper on the continent.

The tweet was later removed from the ANC’s Twitter account, with the party explaining that it was a quote from a member of the public at one of the notorious Soviet-style “public hearings” into land expropriation. However, no quotation marks were used, suggesting that the ruling party was in agreement with the statement.

Zizi Kodwa, an ANC national executive committee member who was present at the decision to move to expropriate the nearly 140 farms said the move was “necessary”.

“Both domestic and international investors must appreciate that long-term investment is tied [to] ownership of land by the majority of people,” Kodwa told the Sunday newspaper, City Press.

“In other words, if you are talking about sustainable long-term certainty, it is tied to addressing the injustices of the past.”

Whereas the radical blacks in the ANC have already stolen or misappropriated at least half a trillion rand in public funds, the party maintains that whites “stole land from blacks” in the nineteenth century. However, the total value of South African farms under white ownership is only R136 billion, according to economists. This would represent only 14 percent of the total amount embezzled by black politicians and their cronies over the last 20 years.

Already the Wall Street Journal, arguably the most influential financial newspaper in the world, has criticised the ANC’s policy of race-based land expropriation by stating in a recent editorial:

“South Africa needs another enlightened leader like Nelson Mandela, but it keeps electing imitations of Robert Mugabe. President Cyril Ramaphosa confirmed recently that his government plans to expropriate private property without compensation, following the examples of Zimbabwe and Venezuela.”

According to the Wall Street Journal, “Mr. Ramaphosa is promising more government spending to regain public support, but snatching private property is about as destructive a policy as there is. The ANC was founded as a revolutionary party, and the tragedy is that it won’t let the revolution end.”

Frontpage Mag recently commented on the effects of the confiscation of white land in Zimbabwe: “Land was stolen from the farmers [in Zimbabwe] who knew how to work it and handed out to politically connected thugs. Soon the former ‘bread basket’ of Southern Africa was starving. Black groups pleaded with the white farmers to remain. Rural Zimbabwe died. Hyperinflation made the currency worthless. A trillion dollars might not be enough to buy one egg. A former food exporter was forced to rely on food aid.”