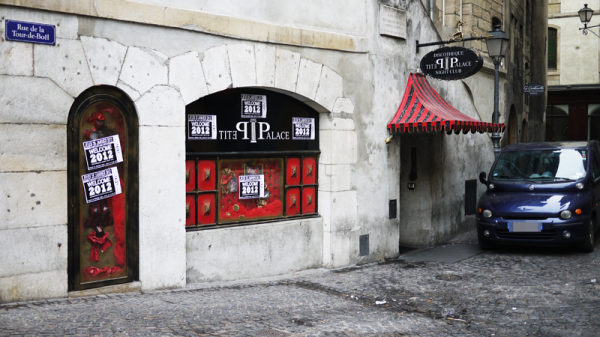 The spot where the women were beaten up with crutches.

A case of attempted murder has been opened in France after half a dozen North Africans assaulted Swiss women outside a discotheque in Geneva.

A vicious attack by young North-African males on Swiss women took place on 8 August in Geneva. About half a dozen of them from over the French border attacked a lone Swiss girl outside “Le Petit Palace” discotheque, hitting her with crutches. It seems the crutches were brought simply to serve as weapons. One of the women, a young mother, was left in a coma for a week. However, the incident has been carefully sanitised by the mainstream media, referring only to the attackers as “youths”.

Four other Swiss women tried to help the girl but were also assaulted by the North Africans. Another woman who wished to remain anonymous, spoke to a French newspaper under the pseudonym “Kenza”, and confirmed that the attackers were North African. During the course of the evening, she had spoken to the one armed with crutches, saying: “He was between 20 and 22 years of age. He was North African, of mixed race, quite well-built with muscles and blonde, discoloured hair. He wore a false Philipp Plein printed T-shirt. He looked like the cliché of a guy from the Arab housing estates. At any rate, he wasn’t from Geneva.”

According to her, the young North African was accompanied by at least three friends “with a similar profile”. He was pestering a lot of girls with advances in the discotheque. Although she did not witness the attack itself, she saw the results. “People came running to the bouncers to tell them that girls were being hit,” she recalled. “When we got there, there were two women on the ground, with one lying in a pool of blood.” She recognised her as the elder of the two women, born in 1986.

After bystanders tried to stop the violence, the North Africans fled in a car with French number plates. No arrests have been made yet.

Because the attackers came from across the border, it would be difficult for the Swiss judicial system to have them extradited. According to a Geneva advocate, Bernard Nuzzo, “If they do not have the French nationality, Switzerland could ask for their extradition. The process could take several months, provided there is no opposition to it.”

However, if the suspects have the French nationality, it could be more complicated as France does not extradite its own citizens. In that case Switzerland could ask for the suspects to be tried in France.

The Swiss Confedaration has already informed France of the incident on its soil. According to the newspaper La tribune de Genève, “about twenty people were present on the scene. An eyewitness saw the attackers fleeing on board a vehicle registered in France, shortly before the arrival of the police. Hence the decision to delegate the investigation to the prosecution of Annecy (in France). A charge of attempted murder has been laid.”

The vice-prosecutor of Annecy, Mr. Pierre Filliard, has confirmed that such a case has been opened.

The attackers have also been positively identified as “youth” from the Haute Savoie region in France, probably from the area around Thonon-les-Bains, opposite Geneva, across the lake. Some of the young North Africans have already had previous dealings with the police.