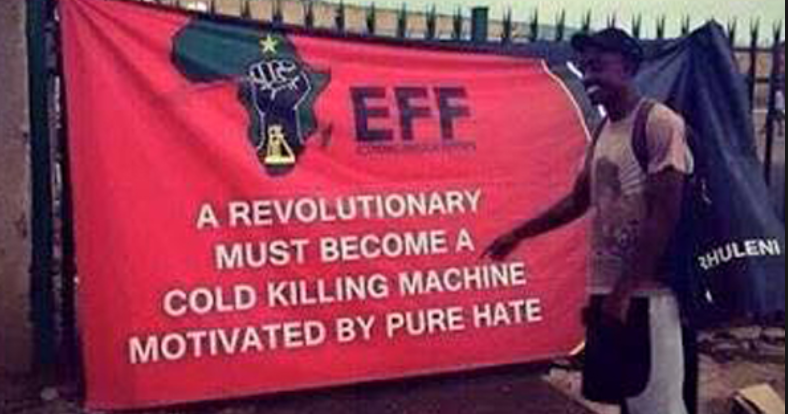 The South African Marxist Economic Freedom Fighter leader slammed the American President, calling Donald Trump a “pathological liar” while claiming that there was a “black genocide” taking place in the US.

“There is actually black genocide in the US. They are killing black people in the US. Black people are even being killed in South Africa,” he said at a media briefing on Thursday at EFF headquarters in Braamfontein, Johannesburg.

At the briefing Malema issued a stern warning to Trump not to get involved in South African affairs.

Malema said a war is coming between those who support expropriation without compensation and those who oppose land theft.

Malema also told the media that whites were being trained to kill black people. “They will kill us for that. There’s a group of white right-wingers who are being trained by Jews in Pretoria to be snipers,” he said, but his claims remained evidence-free.

The EFF leader denounced Trump’s “public opinion games” regarding land. “We must put it on record, unequivocally … Donald – the pathological liar – Trump, we are not scared of you and your USA or Western imperialist forces.

“We are warning you, do not play public opinion games with the land question. It is an emotive issue in which people’s dignity is at stake, our people’s hopes cannot be subjected to a contest on public opinion,” he said.

“We want to send a strong message to the USA authorities, just like we did to the Australian authorities, stay out of South Africa’s domestic affairs,” he continued.

Early on Thursday morning, US president Donald Trump tweeted that he plans to “closely study the South Africa land and farm seizures and expropriations and the large-scale killing of farmers”.

WashingtonNeocon John Bolton recounts in his new book how he was dismayed that President Trump in May 2019 was less interested in discussing attacks on Iran than in the terrible treatment that white farmers in South Africa are faced with.

Covid-19 cases spike in South Africa, an outlier on the continent

PretoriaSouth Africa is among the top five countries in the world in terms of its murder rate, and in the top three for rape and child rape. On the African continent, it is also now the country worst affected by the Covid-19 pandemic.

The three non-governmental private contributors to the WHO

Of the seven largest contributors to the World Health Organization, three are non-governmental private actors. The largest, which gives more than any nation, is the Bill & Melinda Gates Foundation. The third largest donor is the lesser-known GAVI, which is an abbreviation for the The Global Alliance for Vaccination and Immunization.

‘My eye was gouged out by the Libyan Interior Minister’

After the terrible ordeal of a ex-detainee Ragab Rahil Abdel-Fadil Al-Magarhy in the Mitiga secret prison in Libya, an appeal was made to the United Nations.