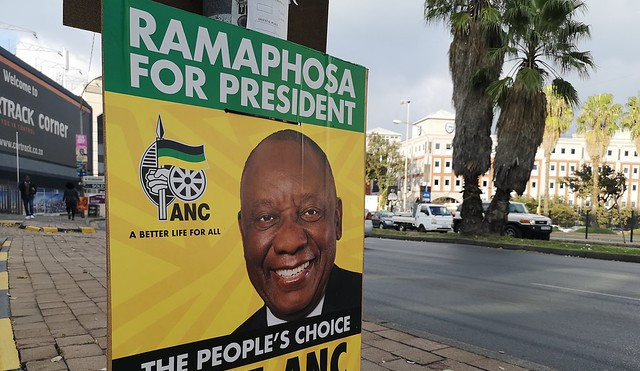 South African election: Swing to the right amid fabricated consensus

Despite ongoing and profound corruption within the ruling party, South Africa's electorate has given the ANC another five years of power. Among white Afrikaans voters, there is a swing to the right, however. FWM takes an exclusive look at the election.

Amid mild allegations of voter fraud being reported, South Africa’s corrupt ruling party, the ANC, will be in government for the next five years, albeit with a slightly reduced majority. But among minority Afrikaner voters, there is a swing to the right with the separatist Freedom Front Plus almost doubling its support, indicated by early vote counts.

With 30% of the votes counted at 11h00 on 9 May 2019, the parties had received the following percentages of the ballot:

In the run-up to the elections, the ruling party was embroiled in various corruption scandals related to the previous president, Jacob Zuma, and his cooperation with the Gupta brothers. However, the secretary general of the party, Ace Magashule, has also been revealed as corrupt and even accused of organising Mafia-style assassinations.

The fabricated consensus among South African voters seems to be so strong that they are oblivious to negative reports on the ruling party. The early results indicate that they have faithfully voted in the ex-terrorist organisation that first came to power in 1994 and has now enjoyed 25 years of uninterrupted rule over Africa’s richest country. Julius Malema has called for white land grab as in Zimbabwe. FWM

The extreme-left and anti-white EFF (Economic Freedom Fighters) seems to have gained support, taking votes from the ANC. Its firebrand leader, who has often made veiled threats to kill all whites in the country, Julius Malema, is now the second-most powerful politician in the country and a faction in the ruling party wants him to return to the fold. Before starting his own party, Malema was leader of the ANC Youth League.

The Freedom Front Plus has made a breakthrough in getting a significant number of Afrikaner and whites votes back, after playing second fiddle to the left-liberal DA over the last twenty years, ever since former DA leader Tony Leon’s “Fight Back” campaign in 1999 which consolidated the Afrikaner vote behind the DA.

Depending on the final tally of votes, the Freedom Front Plus may have demonstrated enough support for its separatist, Afrikaner self-determination project which has been part of the party’s policy since its founding just before the 1994 elections.

Response from overseas has been muted, except for the German AfD (Alternative for Germany) which has expressed its concern that “racist, radical left-wing EFF with its controversial president Julius Malema” should become the “third strongest force”.

“Today’s parliamentary elections in South Africa give cause for concern. Both the ANC and the EFF support the expropriation of white farmers without compensation. The white minority is designated by leading black politicians as a scapegoat for state mismanagement. The white South Africans are openly discriminated against, expelled and murdered, and more than 70 000 white South Africans have been murdered in the last two and a half decades, hundreds of thousands have fled their homes.

“These serious human-rights violations in South Africa are shocking. Equally bad is the deafening silence of the Western world and the federal government. It does not fit in with their vision of the world that racism in South Africa is directed against the whites. Therefore, the problem is relegated and violations of human rights are tolerated.

Germany can no longer watch what is happening in South Africa. The situation there must be put on the UN Security Council agenda by the federal government. In addition, development aid for South Africa must be cancelled as long as the situation for white South Africans does not progress.”

A white ANC member and former South African ambassador to Ireland, Melanie Verwoerd, has commented on the swing away from the left-liberal DA by Afrikaner voters, saying:

“The DA, who is more liberal and English, doesn’t sit that well with many Afrikaans people, especially when it comes to things like schooling and language. Expropriation without compensation (of land) really scared them and the DA was at times a bit iffy on this whereas the FF+ made it a big deal.”