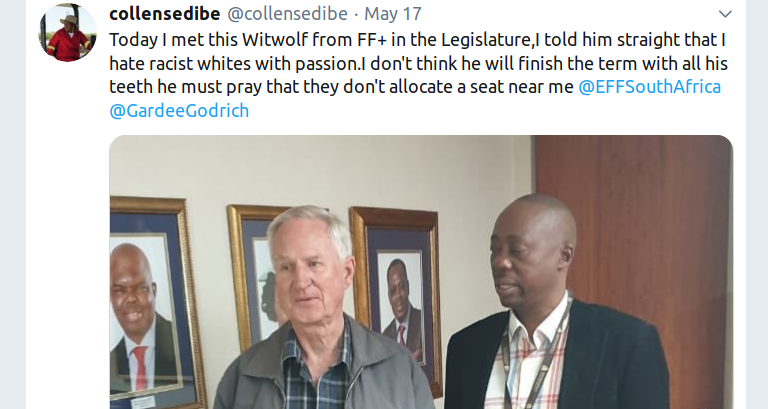 South Africa’s FF Plus party ‘could have done even better’

During South Africa's recent parliamentary elections, the Freedom Front Plus almost trebled its number of votes to 414 844 and the number of its MPs in the national parliament increased from 4 to 10. Dan Roodt spoke to a long-standing and prominent party member, Werner Weber.

While a provincial councillor of the EFF (radical-left, anti-white) in Mpumalanga recently threatened to “knock out the Witwolf’s teeth,” the Freedom Front Plus’s representative in the province, Werner Weber, laughs about it. “I hope he sits next to me,” Weber says. Free West Media interviewed him about the party’s performance in the recent election, as well as its future policy.

The FF Plus did better than expected. What do you ascribe your performance to?

Werner Weber: The newspapers said that. In my opinion, we didn’t do as well as I expected.

There was a negative reaction from Collen Sedibe of the EFF on Twitter threatening to knock out your teeth. Do the FF + and the EFF represent two opposite poles in the South African parliament and politics?

Werner Weber: I’m not convinced he is speaking from his heart. For political reasons, they pretend to hate white people. However, I do not experience such feelings from black people on the street.

Do you think the EFF isn’t as anti-white as they pretend to be?

Werner Weber: They do not represent the attitude of black people. There are very few places with as many black people as Piet Retief where I live and I do not at all experience that attitude here in our town.

Originally, the FF was established to obtain self-determination for the Afrikaner. Does it still form part of the party’s constitution and objectives?

Is it still the party’s quest to get a homeland for Afrikaners?

What does the FF Plus think of the growth among European patriotic or conservative parties?

Werner Weber: Those parties have a very strong sense of nationalism, and this differs little from the attitude of the FF Plus because we are also patriots. We also have Afrikaner nationalism which is very important to us. We do not apologize for what we are, at all. We are proud of what we are and encourage everyone who is an Afrikaner and even whites to be proud of their identity.

Is there any rapprochement between such parties and the FF Plus?

Werner Weber: The German AFD sent a delegation to the FF Plus’s parliamentary caucus and they met. It was about a year or 18 months ago.

Did the FF Plus pay any visits to Europe?

Werner Weber: There was such a visit, but I was not part of the delegation.

Does the FF Plus watch what is happening in EU elections?

Werner Weber: I personally watch it.

What does South Africa’s future look like under the ANC?

Werner Weber: I tend to see the positive, but there are far more negative prospects than positives.

For example, how do you feel about the current economic situation?

Werner Weber: I believe that the ANC’s financial plan is not sustainable and that they are going to get stuck financially. Their plans are just not sustainable. There is huge spending on social programs. Their municipal plan is also not feasible. In the near future, there is going to be a lot of trouble.

Does democracy work well in SA?

Is ANC government good for the broad mass of black people in SA?

Werner Weber: In the short term, it may be excellent, with monetary benefits, affirmative action and so on. But it’s not sustainable. Not financially. There are too many social grants, as well as excessive salaries for civil servants. The money will run out, in future.

What will happen then?

Werner Weber: What will happen then? What happens to any business! Expenditure will have to be cut and they will have to tell the masses you are going to get less money.

Is the FF Plus still an Afrikaner party or is it a party for all the minorities in South Africa?

Are the media more friendly to the FF Plus these days?

Werner Weber: In the last three weeks before the election, the media clearly showed that they were fighting against the FF Plus and for the DA. They want one big opposition party, they don’t believe in smaller parties that can form a coalition.

How would an ideal SA look for the FF Plus?

Werner Weber: It’s a very difficult question. First, everything must be done on merit. We want a peaceful society. We would like to get rid of affirmative action and black economic empowerment, measures that disadvantage whites. Also, the ANC’s plan to nationalise or confiscate land must be scrapped. And there should be no discrimination against minorities.

I believe that if our normal capitalist system could be implemented in SA with equal opportunities for all, it would be better for us.

I want to add, about a homeland: a homeland is our quest, but it is not the solution for everyone. Most of the whites and Afrikaners will always stay inside the country. Our endeavour should also be to obtain justice for those who will not end up in the homeland. The rest of the people in the country should also have rights and we will have to stand up for their rights.

It’s a lot harder to get a homeland under ANC rule. FW de Klerk had to get it for us. It’s very difficult now because the ANC doesn’t want to give it to us. We actually missed the opportunity to get one in 1994.

WashingtonNeocon John Bolton recounts in his new book how he was dismayed that President Trump in May 2019 was less interested in discussing attacks on Iran than in the terrible treatment that white farmers in South Africa are faced with.

Covid-19 cases spike in South Africa, an outlier on the continent

PretoriaSouth Africa is among the top five countries in the world in terms of its murder rate, and in the top three for rape and child rape. On the African continent, it is also now the country worst affected by the Covid-19 pandemic.

The three non-governmental private contributors to the WHO

Of the seven largest contributors to the World Health Organization, three are non-governmental private actors. The largest, which gives more than any nation, is the Bill & Melinda Gates Foundation. The third largest donor is the lesser-known GAVI, which is an abbreviation for the The Global Alliance for Vaccination and Immunization.

‘My eye was gouged out by the Libyan Interior Minister’

After the terrible ordeal of a ex-detainee Ragab Rahil Abdel-Fadil Al-Magarhy in the Mitiga secret prison in Libya, an appeal was made to the United Nations.