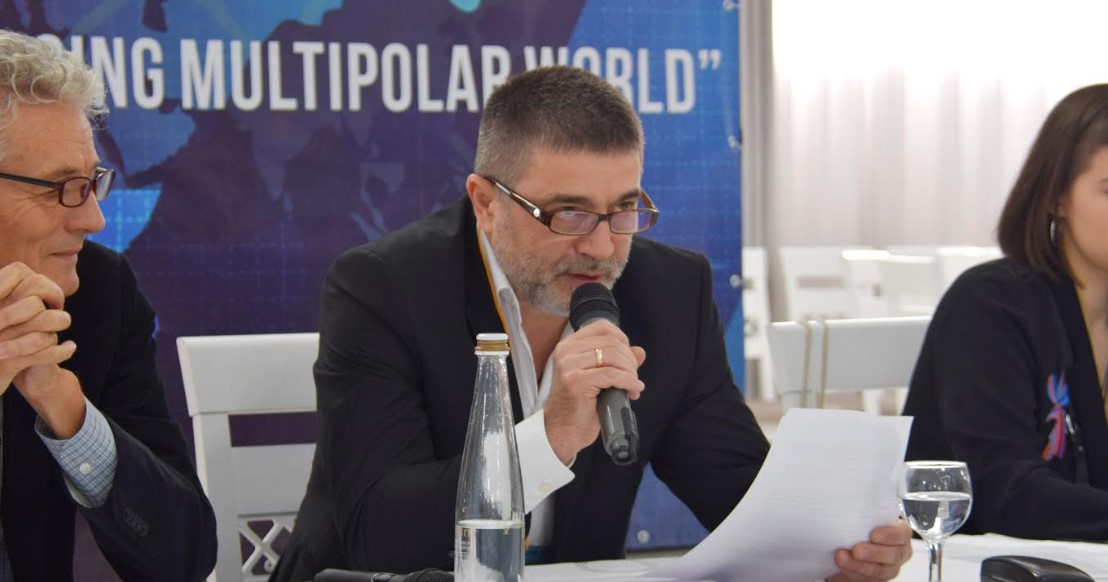 The third international anti-globalist conference "Beyond the Unipolar Moment – Perspectives on the Emerging Multipolar World” was held on September 20-21st in Moldova's capital Chisinau.

One of the main organisers, Iurie Rosca, who is a journalist, former politician and chairman of People’s University, opened the conference by reminding the audience of the history of the Chisinau Forum.

He also introduced this year’s topic: Syria in Flames.

Dear friends, ladies and gentlemen, good morning to everyone and welcome to the third edition of Chisinau Forum, entitled: «Beyond the Unipolar Moment. Perspectives on the Emerging Multipolar World”.

Let me to introduce myself for the people from the different countries who are watching live our event. My name is Iurie Roșca, I am a journalist and publisher from Moldova and the chairman of People’s University which organized our current meeting. I am a former anticommunist dissident and current antiglobalist dissident.

I would like to start our international conference by saying that the main characteristic of my country, Moldova, is her religious identity, Orthodoxy. More than 90 per cent of our citizens belong to the Orthodox Church. Without our faith we wouldn’t exist, we would be just a crowd of old style Homo Sovieticus or new style Homo Americanus. This is why I would like to ask your permission to start our event with the prayer Our Father in my native Romanian language…

Thank you very much. And now let me say just several words about the origins of our initiative which is called Chisinau Forum. This idea was discussed back in 2017 by a group of friends from different countries who share the same conservative, traditional, anti-system and anti-globalist values. Russian philosopher Aleksandr Dugin, French writer and journalist Constantin Parvulesco, Italian Orthodox priest Nicola Madaro, myself and several other people decided to initiate this project as a regular international meeting which will bring together intellectuals who strongly oppose American hegemony,as well as Western supremacy, who contest the globalist agenda and who plead for preserving cultural, religious, ethnic and national diversity, for spiritual and moral values and for another, truly human, more fair and just society. Our conviction is that precisely this kind of cooperation between intellectuals from different countries can help the dissident voices to become stronger in our confrontation with dominant discourse which is shaped by global elites against the interests of our nations.

And now, why did we choose Chisinau for the place of our meetings? Because it is situated between the East and the West, and because this land must never be seen again as part of the dividing line of our continent, nor as part of the geopolitical struggles between the great international powers. In our view, after the end of the unipolar moment of American hegemony, Moldova as part of our large motherland, Eurasian continent, must become the land of cooperation, of confluences, of complementarity between different peoples, cultures and traditions which belong, finally,to the same continental civilization.

The first Chisinau Forum took place on May 26 and 27 of 2017 and brought together intellectuals from France, Italy, Russia, Moldova, Romania, Greece, Serbia, Georgia and Belgium. Among the main speakers at that time where Russian thinker Aleksandr Dugin, French economist and writer who is currently a MEP – Herve Juvin, Georgian opinion leader Levan Vasadze, Belgian civic activist Kris Roman etc. During our first forum we adopted a document which defines our conceptual profile. We called it The Chisinau Manifesto: “Creating the Greater Europe.A Geopolitical Draft of a Multipolar World”.

Our second international event was held on December 15-16, 2017. The topic of that conference was “Financial capitalism and its alternatives for the 21st century. Contributions to the 4th Economic Theory”. The full video is available here.

The second edition of the Chisinau Forum gathered an impressive number of leading intellectuals from many countries that put forward their vision on the current dominant economic and political model and formulated several key concepts concerning the alternative models to the prevailing greedy, unjust and perverse paradigm, which is globally imposed by the corporations.

Unfortunately last year we lost the opportunity to have another forum here in Chisinau only because of me. I am talking about my prosecution by our authorities which had not any kind of admiration for my activity and are trying to put me in jail for some seven years. To be honest, I deeply disagree with their intentions. But I have no any hesitation to continue my struggle for values which are much more important than my freedom. Anyhow during 2018 our international team continued its hard activity by organizing public conferences and book presentations, by writing articles and making videos for our alternative media network.

During these past three years, our team became larger and stronger, other famous dissidents form different countries joining our intellectual family. This way during last period we became more visible and influencing at the international level.

Today, we are happy to announce the presence in our international event of friends who came to Chisinau from more than ten countries.

The first day of Chisinau Forum will be focused on our main topic concerning the end of American hegemony and the perspectives of the nascent multipolar world.

Tomorrow we will have two panel discussions. We will start at 9.00 am with the first panel,called ”Syria in flames”, by discussing the Western aggression against this country which started eight years ago as part of a wider military and non-military, media and economic war against the whole Middle East (Afghanistan, Iraq, Libya, Yemen, Iran) and about all implications which are linked to this broad topic.

Our second panel, which will be held tomorrow, is focused on our editorial activity. We will have the pleasure of listening to the speeches of several famous French authors who are now among us: Lucien Cerise, Youssef Hindi and Pierre-Antoine Plaquevent.  I am speaking about the authors of the books which were translated into Romanian and published by the People’s University during last two years. I would like to mention that among the French authors published by us there are also Jean Parvulesco, Ivan Blot, Herve Juvin, Jean-Michel Vernochet, Valerie Bugault and Jean Remy.

A French historian who I admire very much and who is also today with us is Marion Sigaut. She will also participate tomorrow on our second panel. By the way, I hope to publish at least one of her books in the nearest future.

And now let me to introduce you my colleagues who will be the co-moderators of our event. Daria Dugina, from Russia, she is a historian of philosophy, Paul Ghițiu, a Romanian writer, journalist, film maker and politician, and Youssef Hindi, French historian of religions and geopolitical analyst.

And now I would like to invite you to listen to the speeches of our friends.

Thank you for kind your attention.