Turks give migrants a plan to reach France

Turkish state television has given the migrants massed at the Greek border a plan to reach France. "It’s a declaration of war," warned French conservative commentator Damien Rieu.

On Monday, during a meeting with his Russian counterpart Vladimir Putin, Turkish President Erdogan said the EU should take “its share of the burden ” of the migration crisis. “Millions” of migrants will be heading to Europe “soon” he added. Visuals of Turkish police firing rear gas at Greek border agents have surfaced on social media.

Prime Ministers of Hungary, Poland, Slovakia and the Czech Republic meanwhile praised Greece’s efforts on Wednesday to stem the influx of migrants to Europe following Turkey’s decision to open its western border.

“Greece is indeed active, it has stopped illegal migration and we appreciate its efforts to defend the external border” of the EU, Czech Prime Minister Andrej Babis told the media.

Hungarian Prime Minister Viktor Orban confirmed that there were “already 130 000 migrants north and west of the Greek-Turkish border who were heading to Europe”.

He concluded: “This mass must be stopped as far south as possible, and if that does not work, then of course, as in 2015 as a last resort, the Hungarians will be there to stop them at the Serbian-Hungarian border.”

Austria has been sending police units to the Hungarian-Serbian border while Hungary is manning North Macedonia and Serbia with additional units, Hungarian press service MIT announced.

After a telephone conversation with Erdogan, Orban convened a meeting of his security cabinet which includes the foreign and interior ministers. The cabinet agreed that the developments on the Balkan migration route should be given priority, the PM’s press chief Bertalan Havasi said.

Turkey even released jailed Afghans and Turkish police escorted the freed prisoners to the EU border with their own police cars.

Turkey releases jailed Afghans and police take them to the european border with their own police cars :))

“Turkey doesn’t know how valueable we afghans are, but The Europe knows. Our lives will be saved in Europe” https://t.co/K4sYwZT4N9

“I stayed in prison in Turkey for a month. Today they told me that I was free. I’m going to go to Europe […] The police brought us to the border,” an ex-prisoner told BIZ10 TV.

Greek farmers across the region have assisted the police and the military in their efforts to prevent large numbers of migrants from entering Greece. According to evros-news.gr, the migrants moved from Kastanias to the south of Evros. Thus, farmers with their tractors prevented a massive influx along the border. 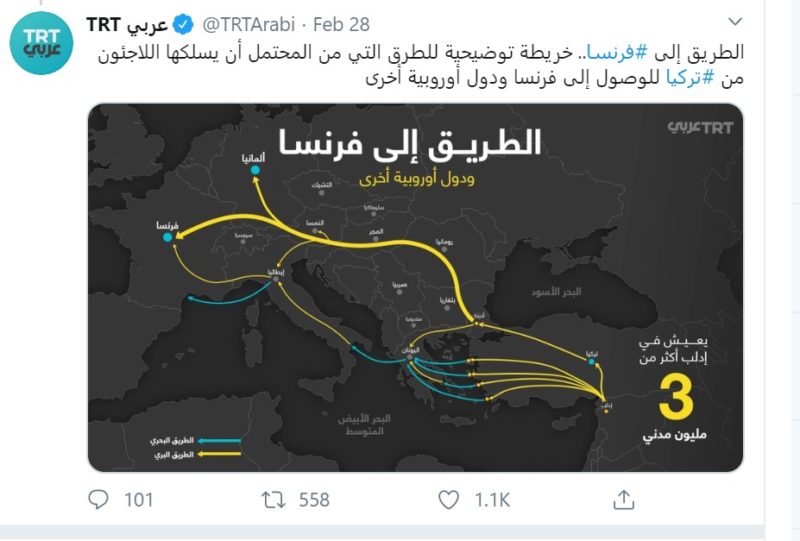 The map given to migrants to reach France. Twitter

At the same time the origin of those arrested from Friday morning 28 February 2020 to the morning of 05 March is as follows: