The Rotterdam mosque De Middenweg and the Amsterdam Blue Mosque are in the grip of the Muslim Brotherhood. This was the message from the terror expert and investigator Ronald Sandee this week during his testimony in the Dutch lower house of parliament on unwanted foreign influence in Islamic institutions. 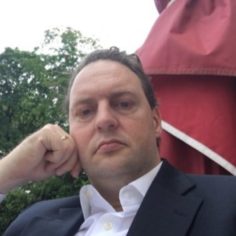 The Dutch daily, the Algemeen Dagblad reported that Sandee told the Tweede Kamer that mosques in Rotterdam and Amsterdam were in the grip of conservative Muslim Brotherhood.

Although both steadfastly deny it, Sandee named Chairman of the Board Jacob van der Blom and Imam Yassin Elforkani of the Blue Mosque as members of the Muslim Brotherhood. Van der Blom is also founder of the De Middenweg mosque.

Sandee has no hard evidence, but: “If it runs like a duck, quacks like a duck, then it may be a duck.” Van der Blom and Elforkani “follow the ideology” of the Muslim Brotherhood he said.

The mosque in Amsterdam, built with money from Kuwait and Qatar, loomed large in the hearing. Sandee, ex-employee of the military intelligence service, also spoke extensively about the international Muslim Brotherhood. According to him, the organisation strives for a “sharia state” in which Islam leads.

The Muslim Brotherhood are commonly well-educated, articulate, and “anti-integration”, said Sandee. According to him, they encourage women to wear veils, and focus on “Islamophobic tendencies in society”.

Sandee named the Blue Mosque as a striking example of the influence from the Gulf region. When Kuwait came in as financier around 2006, a high-ranking Kuwaiti official took over the company that owns the real estate, and according to Sandee, still determines the course of the mosque today.

Sandee also said he heard talk about young converts in the Blue Mosque, who are fairly intimidating in imposing their views. “But that is only hearsay.” 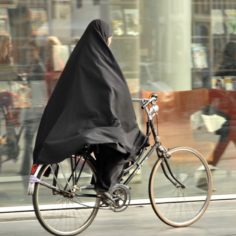 Woman cycling on a sidewalk in a khimar in The Hague, on a Dutch bike. Photo: Wikipedia

In the Middenweg (also financed by the Gulf region and by the same owner as the Blue Mosque), according to Sandee, the influence of the Muslim Brotherhood is evident on the speakers and training. In that respect, he also named the Essalam Mosque in Rotterdam, the largest in the Netherlands.

Ignoring the funding from the Gulf, the Netherlands is a little too naïve, perhaps too gullible, he said. “I have the feeling that countries like Turkey and Qatar follow a completely conscious strategy in influencing Muslim communities abroad. But we are stuck on freedom of religion.”

He advocated for measures to limit foreign funding. He mentioned the Austrian Islam Law as an example, which contains a ban on foreign financing. He also suggested a European ban. “That would be a possibility to limit unwanted influence in one blow.”

The Parliamentary Commission questioned Jacob van der Blom, the ex-director of the Essalam Mosque, which according to Sandee is well-connected with Qatra Charity, a prominent donor to Islamic institutions in Europe. Van der Blom has for years been the director of Europe Trust Netherlands, the owner of De Middenweg and the Blue Mosque. According to Sandee, that is the real estate branch of the Muslim Brotherhood, which serves as a branch of the Birmingham-based mother company, Europe Trust. “I have the feeling that if Europe Trust in Birmingham claims the property, that will happen.”

Sandee signaled the links between the Muslim Brotherhood and Salafists. “A sort of Dutch Salafism or Dutch Brotherhood.”

Sandee was also asked about a detailed article that he wrote last year for an American research site, in which he denounced Amsterdam’s deradicalization policy, which, according to him, is run by dubious figures. Signs of people who are radicalized have been ignored, said Sandee.