Unlike the US, the German government has made no allegations against China in connection with the outbreak of the Coronavirus pandemic.

“The Federal Government is not aware that China has withheld data,” it said in the response of the Ministry of Health to a small question from the FDP group, the German regional daily the Rheinische Post reported.

To the knowledge of the Federal Government, laboratory evidence for the Coronavirus is required for the definition and counting of confirmed cases of infection.

Only such cases in China with the corresponding clinical symptoms and radiological abnormalities have been considered as confirmed cases. “Taking into account the interim situation, the adjustment of the case definition during the epidemic in China is understandable,” the Ministry of Health pointed out.

China had used a different definition for confirmed Corona cases at the beginning of the epidemic until mid-February. Only when the People’s Republic tightened the definition did the number of confirmed cases of infection in China skyrocket.

The United States and other countries have been accusing China of deliberately “covering up” the true extent of the spread of the virus at the beginning of the year.

US President Donald Trump has blamed both the World Health Organization (WHO) and China for not providing all information suggesting that the organisation was a Chinese propaganda tool. On April 8, Trump directly accused the WHO of being biased towards China in how it issued its guidance during the outbreak.

Despite that, Trump said at a White House press briefing: “It could have been stopped in China before it started and it wasn’t. And now the whole world is suffering because of it.” 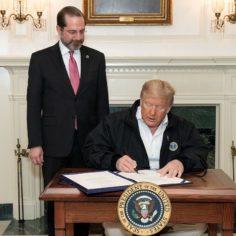 But on January 28, US Health Secretary Alex Azar praised Chinese President Xi Jinping who had agreed to allow a team of WHO experts to enter the country “to work with Chinese counterparts on increasing understanding of the outbreak to guide global response efforts”. Azar is an American attorney and former pharmaceutical lobbyist and executive.

And at the briefing Azar and other health officials stressed that the Coronavirus outbreak presented no an imminent threat to Americans. Smiling, Azar even dismissed the Americans frantically attempting to purchase face masks at pharmacies, supermarkets or online as “unnecessary”.

CDC Director Robert Redfield emphasized at the time that Covid-19 was not spreading within the US. He also said the transmission rate was substantially lower than for other infectious diseases, including measles.

Meanwhile, last week, warmongering US Senator Lindsay Graham, the author of several bills on sanctions against Russia and Nord Stream 2, said China should be made to to pay damages and added that the US should default on the $1,2 trillion of debt the US owns China.

“This is the third pandemic from China. They come from these dirty markets where they have mice and monkeys with a virus, which is then carried through food,” Graham told Fox News. Almost half of the Chinese population source their food from fresh markets since there are very few supermarket chains in the country.

“I want to start writing off part of our debt to China, because they have to pay us, and not visa-versa!” said the senator.

It must be noted that information on the first clinical cases published in medical journal The Lancet challenges the notion that the virus originated from a fresh market.

The paper offers details about the first 41 hospitalized patients who had confirmed infections of SARS-CoV-2. In the earliest case, the patient became ill on 1 December 2019 and had no reported link to the fresh market, the authors highlighted.

Yaneer Bar-Yam, president of the New England Complex System Institute, on March 23 warned in an opinion piece in USA Today that “We Need An Immediate Five-Week National Lockdown To Defeat Coronavirus In America”. However, the US is currently not even on a 50 percent lockdown. This suggests a problem in the US, not China, for the spread of the disease.