Based on a true story: 'Shugaley' shows the horror of the Libyan war. Screenshot from eponymous movie.

Shugaley – ‘A canonical story about a martyr’

Cinema made in Russia: FWM speaks with director Denis Neimand who produced the movie “Shugaley” about two Russian sociologists kidnapped and tortured in Libya.

Mr. Neimand, your new movie “Shugaley” presents a real story about two kidnapped and tortured Russians in Libya. How close is your movie to the real events?

Neimand: ‘The movie is based on the true story’ – in our case it is not a figure of speech, this is the pure truth. Moreover, the events which became a frame for the movie plot are still going on, so the plot just describes them as a documentary would. We followed stories of eyewitnesses, people who are truly familiar with the prototypes of the main characters. 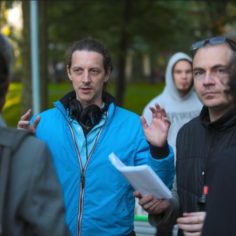 What has been your biggest challenge while producing “Shugaley”?

Neimand: The biggest challenge for me personally is always the same: not to go too deeply into reality, into practicality, but to reach a certain cannon. “Shugaley”, in my opinion, is a canonical story about a martyr who does not give up, about a man who is eager to stand up, to protect his world. Together with a talented actor Kirill Polukhin, we were trying to create precisely that image of a main character. Hopefully, he will not allow viewers to stay indifferent.

Do you think your movie will raise awareness for the fate of the two kidnapped, and probably tortured, Russian scientists in Libya?

Neimand: This was the main aim and task for us – to loudly and audibly relate the guiltless suffering of our compatriots who are now behind bars in the foreign country.

“Shugaley” is a very intense and professional movie drama. What is your personal opinion: can Russia soon compete on the field of action and drama movies with the US film industry?

Neimand: I believe that Russia can do that, but only if it restores the development of its own tradition of a dramatic human movie. This tradition was successfully carried out in Soviet cinema. Taking into account that millions of viewers continue watching old movies, we still can breathe new life into that tradition. But provided that it is done for ourselves, for our viewers, not in the framework of competition with someone according to the rules of others.