Turkey and Albania plan to relocate migrants to Northern Epirus: What are the plans of Turkish president Recep Tayyip Erdogan?

Albania and Turkey have signed a military cooperation plan, but this document has attracted increased media attention because it is shrouded in secrecy. Albanian media are confident that the leaders of the two countries have agreed to relocate 30 000 Syrian refugees to southern Albania. This news alarmed Greece, since around 120 000 ethnic Greeks live the region known as Northern Epirus.

Athens fears that Ankara and Tirana agreed on such a plan in order to “dilute the national minority in this Albanian region”.

On February 27, 2020, the defense ministers of Albania and Turkey signed a plan for military cooperation but details of the document were not disclosed. It is only known that part of the agreement “includes actions which the ministries of defense of the two countries undertake to carry out in 2020 in order to strengthen and intensify cooperation in the field of security and defense”.

The Albanian, and subsequently the Greek media have claimed that Ankara and Tirana are talking about their intention to accommodate 30 000 “refugees” and illegal migrants in Albania, who are now in Turkey.

News agencies citing sources, claim that the Prime Minister of Albania Edi Rama and Turkish President Recep Tayyip Erdogan agreed on this earlier. At the same time, the area where migrants will be relocated to has also been determined – in Northern Epirus, located on the border of Albania and Greece.

Greece liberated this area during the First Balkan War in 1912–1913, but the international powers decided to give it to Albania, with the same scenario being repeated after the World War II. The region thus remained in Albania.

Greek newspapers reported that Orthodox Greeks in the area “were constantly harassed by Muslims”.

Tensions intensified in the 1990s. Today, there are even fewer Greek schools in the region, “the shops of Greeks are attacked, property is sometimes confiscated by means of a far-fetched pretext, and they are not allowed to conduct religious rites”. In addition, Greeks are discriminated against on a national basis. For example, Greeks can neither serve in the police, the army, nor occupy high positions of state, etc.

Albanian media reported in early March that the construction of six refugee reception centers were being planned on the border with Greece, able to accommodate 30 000 people, as well as first aid centers. It was noted that construction was necessary if ever “Albania faces an influx of Syrian refugees from Greece”.

More information has been leaked since: that “work is being carried out to provide the resettlement of refugees either in rural houses or in new special settlements in the area”. At the same time, the media has been drawing attention to the fact that Tirana has no money for the construction of the corresponding infrastructure.

Albania is still struggling to recover from the earthquake that happened on November 26, 2019.

Additional indirect confirmation of cooperation between Tirana and Ankara, is the fact that, in the background of the Coronavirus pandemic, Albania has banned all international flights to the capital, except flights to and from Istanbul. 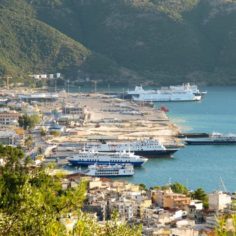 Igoumenitsa is the main port in Epirus, and links the Greek region to Italy. Wikipedia

There is no official evidence that Turkey and Albania have entered into a secret agreement. However, the Greek community in Northern Epirus is very concerned about this prospect.

Thodoris Goumas, the editor of the news portal Himara.gr, which is located in one of the biggest Greek towns of Northern Epirus Himara, gave an interview to the Greek newspaper Protothema. He expressed the huge misgivings that both native Greeks and their brethren in Northern Epirus have about the deal between Ankara and Tirana.

“The activities of the Albanian Prime Minister are rather suspicious, rumors do not come out of nowhere. The choice of the Northern Epirus region for resettlement of Muslim refugees means a deliberate provocation against Greece,” Goumas concluded.

Vladimir Avatkov, associate professor at the Diplomatic Academy of the Russian Ministry for Foreign Affairs, noted the existence of rather close ties between Ankara and Tirana and believes that agreements regarding the resettlement of refugees to Albania quite likely exist:

“Turkey is an extremely active player in the Balkans, it proceeds from the fact that Albania, like many other states on this peninsula, is within Turkey’s sphere of influence. Ankara supported Tirana’s entry into NATO. It is through Albania, as well as through some other states of the Balkan peninsula, that Turkey pursues its active policy of influencing Europe.

“Albania is also important from the point of view of the refugee transfer, and for blackmailing Europe with the migration crisis. Turkey proceeds from the fact that it is a world power and is capable of exerting pressure on a number of states, including the developed countries of Europe.

“In addition, despite the fact that some states of the Balkan peninsula have a negative historical perception of Turkey due to the fact that it occupied these lands a while back, some states have close ties with Ankara and carry out functions of a conductor for Turkey.”

Currently, there are 3,6 million refugees in Turkey. In March 2016, Ankara entered into an agreement with Brussels, according to which Turkey agreed to keep migrants out of European countries. In exchange, the EU promised Turkey assistance in supporting refugees, a visa-free regime and a launch of negotiations on accession to the European Union.

However, Erdogan had repeatedly complained that the funds allocated by the European Union are insufficient and, moreover, Brussels does not comply with other conditions of the agreement.

Turkey has repeatedly stated that it is becoming increasingly difficult for the country to cope with the placement of refugees. At the end of February this year, the Turkish authorities announced that they were not going to interfere with the free movement of refugees to Europe. This caused consternation in Greece, which has already suffered a lot due to the migration crisis.