Race demonstration in the middle of corona-affected Stockholm

On Wednesday afternoon, between 1 000 and 2 000 protesters gathered to protest against "racism" and US police violence at Sergel's square in corona-affected Stockholm.

Hospital staff who are struggling to save the lives of the Covid-19 infected patients, expressed alarm after thousands violated existing safe-distance regulations. 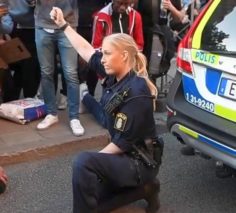 Female police participating in the demonstration with a Black Power salute instead of working to dissolve it. Photo: Still image Youtube

A female police officer opted for taking a knee – the symbol used by whites to signal racial submission and “white guilt”.

Protesters had sought and obtained permission for only 50 people to gather and demonstrate at Sergel’s square in Stockholm in support of George Floyd, a 46-year-old black drug addict and convicted gun robber, who died in connection with a police intervention.

Several other international protests have been held in other countries such as the United Kingdom, France and Germany, many of them marked by violent incidents with the police. Sweden was no exception.

The majority of the protesters were young white women, but immigrants also showed up. Before the demonstration was officially launched at 6 pm, the police called on the crowd to disperse but were ignored and insulted.

After the protest was dispersed by police, people began to leave Sergel’s square in order to march on Sankt Erik’s square in Vasastan. There, the mood became violent and a police car was surrounded by angry protesters.

The situation developed into a quite a spectacle when a blond female police officer took a knee to calm down protesters. She could be seen crying and hugging some of the more-than-50 protesters. A number of other violent incidents were recorded during the day and evening.

According to information in the Aftonbladet, a mall closed down due to fear of rioting as some people tried to storm the complex.

At T-central, police used batons and pepper spray against protesters who threw bottles and stones at the officers. Two people were injured and taken to hospital. It is not yet clear if they are police officers of protesters.

A person has also been arrested on suspicion of instigating a violent riot at Brunkebergs Torg, where he threw objects at police and guards reported police spokesman Mats Eriksson to Expressen.

Clashes between police and protesters took taken place near Stockholm Castle where left-wing extremists and immigrant men tried to attack the police on the spot, but were chased away during baton strikes. Protesters were pepper-sprayed. According to reports, the police had rocks and bottles thrown at them during the demonstration.

No attempts were made to disperse the protesters.

“Of course we can all think that what is happening in the US is bad, but to approve a demonstration where you know that the dynamics are such that there will be a very large number of people on a limited area, then one wonders if anyone has holes in their heads,” Björn Olsen, professor of infectious diseases told Expressen.

He added that it was an “extremely effective way of spreading the infection”.

During the live broadcast of the demonstration from Aftonbladet, a nurse commented: “As a nurse in the Covid department, this feels like a slap in the face considering the current situation. How many more patients may we need to nurse now?”