While Russians are voting for their new constitution, the Russian government is pursuing a legal case against a group around Mikhail Khodorkovsky, an exiled Russian in London and former oligarch, with assets worth an astounding $53 billion.

At the end of next week, Russians will vote on a new constitution. If this is voted through, national and conservative values ​​in Russia will be strengthened while attempts from abroad to take power over the country will be hampered.

On the other side of the Atlantic, oligarchs in exile are currently trying to challenge the Russian government by handing out billions of dollars to its foes. This election is part of a global, political power game as international oligarchs try to mobilize to take over power in the country.

Between June 25 and July 1, the Russian people will go to the polls to vote on a new constitution in which a large number of legislative changes are proposed with a major focus is on strengthening Russian identity, family and civil society.

The nation is described as “united through a thousand years of history, affirming the historically developed national community with the memory of ancestors who gave us ideals, faith and continuity in the development of the Russian state”. Marriage is proposed to be defined as a unity between man and woman – considered to be of great symbolic value.

The proposal also contains some changes and positions that strengthen national democracy. For example, the popularly elected national parliament, the State Duma, gains increased power. And in these times when globalist organisations are doing everything to establish and strengthen “international law”, the new draft Russian constitution states that Russian law will always trump international rules.

Other changes will guarantee a higher standard of living. A minimum wage will be handed out and pensions will automatically be calculated over time.

Foreign nationals or Russians who are living in other countries will, if the new constitution is adopted, no longer be able to be electable as a president, minister, judge or regional leader. This can be interpreted as a constitutional safeguard against oligarchs operating from overseas and with outside support – or “foreign electoral influence” as it is called in Western countries – mobilizing to take power over Russia.

A concrete example is that of the oligarch Khodorkovsky, who had great influence over the state apparatus at the end of the communist era and who, during the 1990s transition to a market economy and capitalism, managed to plunder the state by taking over companies and natural resources to quickly become Russia’s richest man.

Together with Henry Kissinger and Lord Jacob Rothschild, and with open support from, among others, the US House of Representatives and George Soros, Khodorkovsky runs the political activist organisation “Open Russia” whose goal it is to take power over Russian society and change it into a left-liberal state. 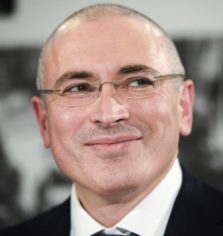 Mikhail Khodorkovsky would like an opportunity to keep plundering the Russian state. Photo: Wikipedia

Khodorkovsky has been seen as one of the foremost potential challengers to Russian President Vladimir Putin, but if the Russian people vote through the new constitution, Khodorkovsky will not be able to be elected president in the future.

Russia believes that the huge resources amassed by Khodorkovsky illegally, should be repaid to the Russian state, but Team Khodorkovsky is actively lobbying all and sundry to persuade the US judiciary that they should be keeping the funds.

Most talked about in Western media is the proposed loosening of the restriction on how long a president can serve, and letting voters decide on this issue instead. The Wall Street Journal writes that this change allows the president to potentially serve until 2036 and then surpass Soviet dictator Josef Stalin’s close to three decades in power”.

However, the neoconservative newspaper is not concerned about the fact that a large number of Western democracies (including Sweden) have no limitation at all on how long a head of state can serve.

At the same time, the Ukrainian government is trying to prevent Russian citizens in Crimea from participating in the referendum by threatening that it would be “illegal” to vote.

Opinion polls from the past three months have pointed to strong voter support for the new constitution, with some indicating at least 49 percentage points. Only in one survey did the no-side lead and then only by two percentage points. At the same time, in this poll, more than one in three voters had not yet decided how to vote.

Support for President Putin himself has fluctuated between 59 and 69 percent in spring, which is quite high compared to Western polling scores.