Portland protests have not stopped since the death of George Floyd. Photo by titofoto
Portland

Racial activists burned the Bible and the American flag outside the Portland courthouse, where riots have not abated since the death of George Floyd.

Black Lives Matter activists will find it increasingly difficult to prove their movement is pacifist. For more than two months now, riots have plagued the United States, and particularly the city of Portland, Oregon, where US President Donald Trump has been forced to deploy numerous federal agents to maintain order. 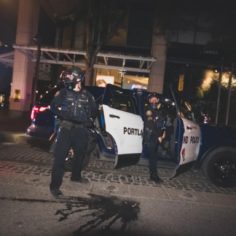 Portland police deployed in the city. Six federal agents were injured last week when protesters launched fireworks at them and shone lasers at their eyes. Photo from titofoto

On the night of Friday July 31 to Saturday August 1, racial activists highlighted their symbolic violence aimed at white Christians by burning Bibles and an American flag, reported the New York Post.

The scene, extensively filmed and shared on social networks, shocked the United States. Several hooded activists are seen setting a Bible on fire, then covering it with the American flag, and setting it alight, shouting “F*ck Trump!” in front of the Portland courthouse.

In another video, other activists are seen, carrying Black Lives Matter signs, lighting a large bonfire made up of an assortment of trash and wood panels stolen from neighborhood businesses, while throwing more Bibles in the flames.

Left-wing activists bring a stack of Bibles to burn in front of the federal courthouse in Portland. pic.twitter.com/lYWY0x8n8P

Agitators trying to provoke a response from federal officers. Violently battering the door with kicks and using their shield as a battering ram. pic.twitter.com/ULrKT4RQNx 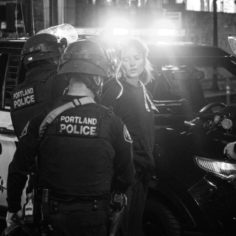 Portland police arrest a protester. One agent permanently lost his hearing and suffered lacerations and burns on both his forearms after protesters shot a firework at him, the Associated Press reported.Photo from titofoto

According to several journalists present on the spot, the Black Lives Matter activists, mixed with Antifa activists, tried to provoke the federal police forces stationed inside the courthouse. The rioters even violently hit the garage door of the building with a makeshift ram and set garbage cans on fire.

A few days earlier, rioters in Portland had set fire to a pig’s head wearing a police cap and an American flag. Regularly, racial activists try to provoke the police by throwing them with excrement, bleach, bricks or even batteries, reported the New York Post.

“It’s scary. You open those doors out, when the crowd is shaking the fence, and … on the other side of that fence are people that want to kill you because of the job we chose to do and what we represent,” a Deputy US Marshal told the Associated Press.

Wilson, North CarolinaFive-year-old boy Cannon Hinnant was executed at point-blank range with a gunshot to the head according to witnesses. While playing outside, a 25-year-old black felon Darius Nathaniel Sessoms, ran up to the boy and shot him. This terrible deed has only been covered by local news outlets.

Dramatic rise of black gun owners in US

WashingtonThe rise in gun ownership in the United States has spiked more than any other time in recent history – the highest since the FBI began recording the statistics 22 years ago. But it is also Democrats, not only Republicans, who have been rushing out to buy weapons.

WashingtonA re-education camp for white men funded by the US taxpayer for a nuclear research laboratory in the United States, was aimed at deconstructing "white male culture".