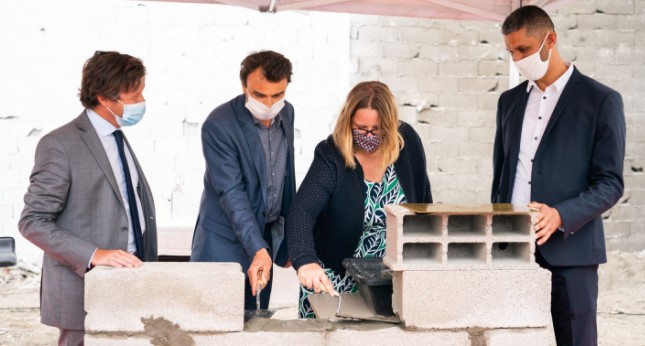 Not very secular: the Green Mayor of Lyon lays the foundation of the city's mosque. Facebook

Under the guise of “secularism”, the Mayor of the French city of Lyon Grégory Doucet did not attend the traditional ceremony of the Vow of the Aldermen dating back to 1643.

His “secular” inconsistency was once again exposed in broad daylight on Tuesday, September 8. The EELV member of Lyon Doucet, under cover of “secularism”, refused to attend the ceremony of the Vow of the Aldermen, an old Catholic tradition but still popular dating back to 1643.

He thus became the first mayor from Lyon in decades to miss this major event on Rhone’s cultural calendar. Surprisingly, however, the very next day, the city councilor laid the first stone of the Gerland mosque.

And Grégory Doucet even boasted about his presence at this decidedly non-secular event. On Twitter, he posted a photo of himself, trowel in hand, with the message: “Freedom of conscience should not suffer any more attacks. Public authority has the duty to protect the faithful who want to practice their religion, just as it must protect those who do not want to practice. Or who do not want to believe.”

On Tuesday September 8, the ecological mayor had explained that he did not wish to participate directly in the Catholic ceremony of the Vow of the Aldermen because of the “interpretation” that he had of “the rules of secularism”.

Possibly realizing his misstep, he then tempered his remarks by declaring that he would nevertheless speak at the end of the ceremony, to mark the importance of “dialogue with each religious community”.

This news had obviously delighted his majority, in particular his assistant for Culture Nathalie Perrin-Gilbert, who had always expressed her opposition to this tradition. The president of the Métropole de Lyon Bruno Bernard had also announced that he would not be present.

For the Vow of the Aldermen, celebrated every September, the mayor of Lyon presents a symbolic shield to the city’s archbishop during a ceremony at the Fourvière basilica, where many elected officials from all sides usually gather. The basilica is listed as a historical monument, registered to the UNESCO World Heritage Site. It is considered as the emblem of the city of Lyon, and welcomes over 2,5 million pilgrims and visitors each year.

This particular tradition dates back to March 12, 1643 when, to ward off the plague, the Aldermen had vowed to erect two statues to the Virgin and to climb the hill of Fourvière each year to offer the sanctuary, during a mass, a golden shield and seven pounds of white wax.

The annual pilgrimage was made until 1789 when it was abolished. But it again became an official practice and a custom at the end of World War II.