Paul Cliteur is a professor in Leiden, The Netherlands, a member of the Senate with Forum for Democracy, and the author of, among others, The State vs Wilders. Cliteur commented on the curious verdict recently announced against Geert Wilders.

Cliteur told De Dagelijkse Standaard that while the Court of Appeals in the Hague convicted Geert Wilders of group insult for his statement about “fewer Moroccans” he was acquitted despite the attempts by the Public Prosecutor to convict him for incitement to hate or discrimination.

Though it is naturally a disappointment that Wilders was not cleared of all charges, it is nevertheless a small success that now, all of a sudden, the incitement to discrimination on the grounds of race has disappeared. That has taken the sting out of the conviction, because only the group insult on the basis of race remains, argued Cliteur.

It is quite a backward move by the Appeals Court, he added, compared to the standpoint of the lower court. According to Cliteur, the next battle that Wilders is facing in the Supreme Court, will see the demise of the racial insult accusation, because the Supreme Court will, hopefully, acknowledge that Moroccans are not a race, but rather a nationality.

No Moroccan race and no Moroccan ethnicity exist, just a nationality, he said. And the legislature has explicitly not included that in the law. Thus, the zealots who want to include the concept of race can claim whatever they like, but, in doing so, they violate the principle of legality, and with it the rule of law, Cliteur concluded.

There remains the central problem however that the administrative elite, for one puzzling reason or another, is obsessed with labeling one group a “victim” while someone who spends the rest of their life on a jihadist death list can count on zero compassion.

PVV leader Wilders meanwhile reacted furiously after the statement by the Public Prosecution Service (OM) that the controversial rapper Akwasi will not be prosecuted for his inflammatory remarks on Dam Square. The Forum for Democracy supported Wilders.

“Total arbitrariness,” Wilders said. “I ask a question, stand in court for six years and am convicted, Akwasi threatens with brute force and goes free. The Netherlands has become a corrupt country.”

“Legally stupid,” said FvD MP Theo Hiddema, who is also a criminal lawyer. According to him, the decision of the Public Prosecution violates the principle of equality before the law. He points to similar cases: the lawsuit against Geert Wilders and the conviction of Jenny Douwes.

“Wilders asked a question about ‘less, less’ and Mrs Douwes tried to protect children from the activists of Kick Out Zwarte Piet, while this man has been harboring visibly violent fantasies for 10 years.” 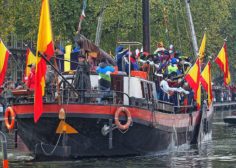 The arrival of the Sinterklaas boat. Wikimedia.

More than 40 people had reported Akwasi for his comments on Dam Square during the Black Lives Matter demonstration in June. The rapper gave a speech saying: “The moment I see a Zwarte Piet in November, I will personally kick him in the face.”

Recently, old tweets from Akwasi surfaced in which he called for violence against Sinterklaas and Zwarte Piet. In 2011, Akwasi tweeted: “Is anyone ever going to murder a Zwarte Piet or should I do it?” Also: “What am I provoking if I kill a Zwarte Piet?”

In 2012 he tweeted: “Zwarte Piet must die, man. Seriously.” A few months after an attack on Queen’s Day in 2009, the rapper fantasized about blowing up the steamboat that brings Sinterklaas and his blackface companions to the Netherlands every year.

The discredited public prosecutor Jacobien Vreekamp, who signed the decision on behalf of the Public Prosecution Service (OM) not to prosecute rapper Akwasi, until recently worked closely with Kick Out Zwarte Piet (KOZP) frontman Mitchell Esajas.