An US Postal Service insider told Project Veritas – a conservative media organization dedicated to secretly infiltrating leftist organisations to expose their underhanded dealings – that postal clerks in Michigan were told to fraudulently hand-postmark all new ballot envelopes for November 3.

Michigan and its 16 Electoral College votes are at the center of the highly contested 2020 US presidential election. President Donald J. Trump as well as Joseph R. Biden have declared victory.

Trump has claimed victory in Michigan as well as in North Carolina, Pennsylvania and Georgia. The Associated Press and other US media has however announced a win for Biden in Michigan. But according to Trump’s campaign staff, there has been “massive cheating” during the election and they initiated lawsuits to cut off ballot counts in both Michigan and Pennsylvania. 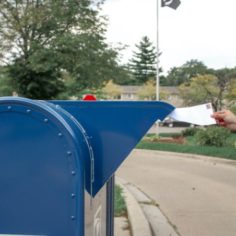 An American voter mails a ballot for the 2020 elections. In Michigan, late ballots were fake-stamped to November 3, according to a USPS clerk. They were ordered by their supervisor to do so. It has not been established whether the supervisor was paid off to commit the fraud, but Big Tech oligarchs and “blue” bilionaires certainly have the funds. Photo: Element5 Digital

It has now been revealed that Jonathan Clarke, the Barlow Branch USPS morning supervisor instructed a group of mail carriers to fake-stamp the date on late ballots as Michigan law requires that ballots be received by no later than 8 pm on election day in order to be counted. This deadline had been set by the Michigan Court of Appeals.

The whistleblower told Project Veritas that he had been aware that fake-stamping ballots would be illegal: “As far as I am aware, we’re not supposed to be counting ballots that are postmarked after the third of November here in the state of Michigan.”

Ballots had to be taken from the sorting bins and put into Express Mail bags, so they could be taken “to the plant,” which is the postal distribution facility, he said. Angry USPS postal clerks said they were initially too afraid to speak up to expose this fraud.

Project Veritas founder James O’Keefe underlined that “mail-in ballots are always a problem because there is no chain of custody between voter and the actual ballot box”.

In the state of Georgia, a Republican poll observer witnessed how 53 late absentee ballots were illegally added to a stack of on-time absentee ballots in Chatham County. The Trump campaign said in a statement in response to this fakery that “we will not allow Democrat election officials to steal this election from President Trump with late, illegal ballots”.

Trump supporters questioned the record 89 percent voter turnout in Wisconsin, a surge of 22 percent compared to 2016. Many wards in Milwaukee, the largest city in the state, also reported more votes in the presidential election than there were registered voters.

President Trump was ahead in Wisconsin for most of the day, before massive vote dumps at 4am in the morning suddenly turned the state in favor of the Democrats. The sudden surge was statistically impossible, campaigners pointed out.

This is literally 5+ standard deviations from the mean. That actually = statistically practically impossible https://t.co/p69A4VlUe3

In Arizona voters voters admonished Fox News for prematurely declaring of victory for Biden in the state. A Trump campaign senior advisor, Jason Miller, cited over a half million uncounted early ballots in the state and urged The Associated Press and Fox News to retract their hasty calls.

Commentator Bill Mitchell – who was also banned from Twitter for supporting Trump, said the high turnouts in other states were suspicious. “Along with Michigan, Pennsylvania also had 80 percent turnout. These numbers are just preposterous. And it’s all due to the fake absentee ballots,” he said.

“President Trump outperformed his 2016 totals in Wisconsin by 200 000 votes but fake absentee ballots for Biden overwhelmed him,” Mitchell explained.

BostonHarvard Business School has been forced to move classes for all first-year and some second-year MBA students online, following a spike in Covid-19 cases among their fully-vaccinated student body.