Thousands of Catholics demonstrate across France against confinement

In Bordeaux, Nantes, Rennes, Nice, Marseille and Toulouse, many believers gathered in front of churches on Sunday to demand the lifting of the ban on masses.

The demonstrators demanded the restoration of a “vital need” on Sunday, November 15. Thousands of Catholics gathered across France to demand the lifting of the ban on mass in public, imposed by the government during confinement due to the Coronavirus pandemic.

In Bordeaux, Nantes, Rennes, Nice, Marseille, Toulouse and Strasbourg, they were between 200 and 300 loyal to demonstrate, and more than a thousand in Versailles, reported French daily Le Parisien.

All demanded the return of “their” masses, a week after the decree by the Council of State, and on the eve of a meeting between representatives of religions and Prime Minister Jean Castex and Interior Minister Gérald Darmanin. 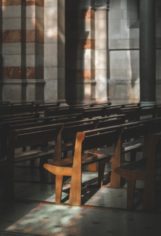 In Versailles, on the forecourt of Saint-Louis Cathedral, the crowd alternated between religious songs and slogans such as “Mass, mass is essential” . Whistles were also blown against the government. “Are we being told about basic needs? Here is ours! We want mass,” chanted one of the organizers of the rally in the royal city.

“We need Mass, it’s not just an activity, it’s something that nourishes us spiritually,” argued a speaker in Nice, where the crowd gathered at the foot of Notre-Dame Basilica where a jihadist had recently murdered three people.

For many demonstrators, this ban represents an attack on the freedom of worship. “The fundamentals of the Republic mean showing respect for the cults of everyone” , pleaded a demonstrator from Bordeaux. Others highlighted the absence of health risks. “There is a way to filter and control people,” said the organizer of the Rennes rally.

After the demonstrations, Matignon indicated that Jean Castex would join Gérald Darmanin during the meeting scheduled for Monday, November 16 with representatives of religions, to “take stock of the restrictions on religious ceremonies linked to the health crisis”. On this occasion, the Conference of Bishops of France will present a proposal to the government for a health protocol allowing the resumption of services.

On this subject, politicians remain divided. The president of the Senate Gérard Larcher and the leader of RN Marine Le Pen pleaded for a resumption of masses, while the national secretary of the green party, the EELV Julien Bayou, opposed it in the name of the “principle of responsibility”.

The vaccination center of Lans-en-Vercors was put "out of use" on Friday. And the vaccine tent of the municipality of Urrugne was the target of an arson attack on Saturday.

Why did the Ministry of the Interior not warn Germans of the coming floods?

BerlinWhy were so many human lives lost during the floods in Germany? After initial criticism of the lack of warning messages from public television, the focus is now on the Federal Office for Civil Protection and Disaster Aid (BBK), which is subordinate to the Federal Ministry of the Interior.