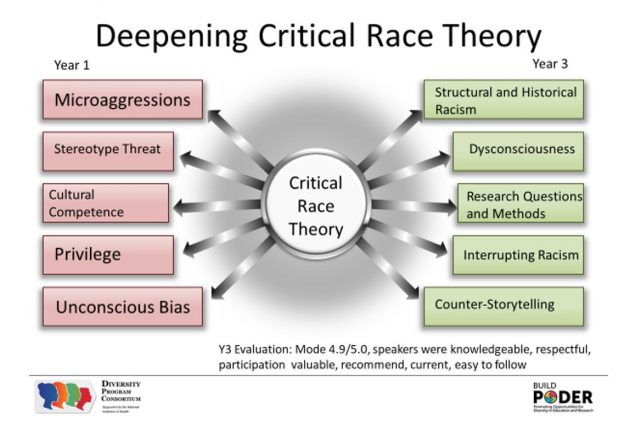 Ethnocidal ‘Critical Race Theory’ is upon us like white on rice

In the USA, even soldiers have to be "sensitised" to racial issues. Ilana Mercer further comments on how 'Critical Race Theory' exerts control over America.

Critical Race Theory is the “remedial” lens through which America’s race reality is refracted.

It’s on the playground and in the classroom. Watch for the bossy white kids.

It’s in businesses and boardrooms, where microaggressions tumble from the mouths of their white mothers and fathers.

It’s in government departments, brought about by the few whites who haven’t been weeded out by quotas and set-asides for “oppressed” minorities.

There, this irredeemably uppity demographic persists in strutting its “oppressor stuff,”  emitting up to 15 “microinequities” per minute, by the estimation of the subintelligent social “science” of human-resource department sickos.

It’s in the FBI (Federal Bureau of Investigation), wherein workshops on intersectionality only just keep the plague of white privilege at bay, among bureau agents who haven’t yet been deluged by Trump derangement syndrome.

Introducing the Critical Race Theory chimera to the U.S. military falls within the mission of this vast, global welfariate. The military must keep the enemy in good mirth during the COVID lockdown.

And, there is nothing that makes swarthy Jihadis laugh harder than the idea of white soldiers—a mere 55% of the force—walking meekly. The U.S. Military might no longer know Matthew 5:5, but to the enemy, they look like they know who’ll inherit the earth. “Ha, ha.”

This Cultural Marxism of a theory is an ill-founded, purely political, symbolic figment that appeals not to empirical evidence, reason and morality, but to the roiling, base emotions of rage and resentment against anyone with a white face.

Say it! A “white” face: The words media conservatives cannot bring themselves to utter.

Not even Rufo. The aforementioned path-blazing investigator into, and crusader against, Critical Race Theory in the U.S. concludes his inquiry thus:

“Let me say it plainly: critical race theory is a toxic, pseudoscientific, and racist ideology that is taking over our public institutions—and will be weaponized against the American people.” [Emphasis added]

Yet, the only Americans Critical Race Theory targets with ethnocidal animosity are white Americans.

That’s also the main reason white women like Jessica Krug and Rachel Dolezal pretend to be black: In America, white is bad and black is beautiful.

Contra Tucker Carlson: More than they long to join the “booming racial grievance” industry—as a guest on the popular Fox News show contended—these pitiful poseurs want to be included in black supremacy’s mythology.

Like black Americans, these women simply want to be looked upon as carrying the heaviest historic baggage; nobler and more righteous than the rest.

The words “preordained and predetermined” are key to understanding Critical Race Theory, according to which power relationships in society are proscribed—and statically fixed for posterity.

Over and above seeking to invert and eviscerate bourgeoisie morality—and instantiations of it like American suburbia—Critical Race Theory does away with reality.

For no matter how impoverished and drug-addicted white America becomes—never mind how often white men are passed over for promotions, opportunities, job placements and positions; no matter the white-hot hatred etched upon pale bodies by knockout gamers—Critical Race Theory has designated the country’s founding demographic as oppressive. Forever.

It’s as evil and atavistic as all that.

By all metrics, one of the most profound early warnings against such postmodernism was sounded by Pope (now Saint) John Paul II in his 1998 encyclical “Faith and Reason.” With unhectoring clarity, the Holy Father spoke, in a postmodern religious wilderness, against the errors of relativism in modern thought.

Who other than Pope John Paul, back then, had pointed to how “a legitimate plurality of positions has yielded to an undifferentiated pluralism”? And who among men of cloth had the intellectual alacrity to forewarn that inherent in the error of relativism is a rejection of the search for truth, and, with it, reason?

If we accept that all positions are equal and no one position can be better than any other, we have forfeited our ability to discern, and forthwith our Judeo-Christian heritage, cautioned the pontiff.

Little did the pope know that one postmodern error—faith in a plurality of equally weighed truths—would spawn an even greater evil: Critical Race Theory, according to which there is only one immutable truth, and it is that white is evil incarnate.

Little did Pope John Paul II know that in the hands of the Church’s cherished masses, Critical Race Theory would become a political power tool to exact retribution—and worse—against the pigmentally challenged.

Ilana Mercer has been writing a weekly, paleolibertarian column since 1999. She’s the author of Into the Cannibal’s Pot: Lessons for America From Post-Apartheid South Africa (2011) & The Trump Revolution: The Donald’s Creative Destruction Deconstructed” (June, 2016). She’s currently on Gab, YouTube, Twitter & LinkedIn, but has been banned by Facebook.