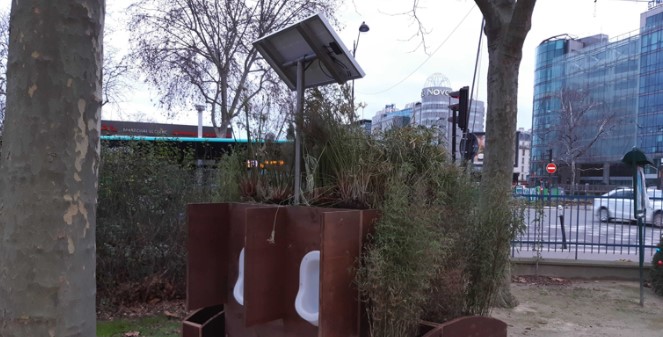 Installed in the summer of 2020 in the Chapelle district in Paris, the “Naturinoirs”, which were to contribute to the greening of the district, has turned into a total fiasco. Dilapidated, unsanitary and inefficient, they have had to close to the public.

It was a foregone conclusion. Less than six months after their installation, the “Naturinoirs” of the town hall of Paris had already become giant, toxic waste bins. Basically, according to French daily Le Parisien, the three installations – two urinals and a cabin – were allegedly designed to recycle urine, in order to transform the latter into fertilizer. Alas, the “Naturinoirs” do not work, since the shadows cast by the neighbourhood buildings prevent the solar panels of the equipment from functioning.

Worse, the huge tanks, which can contain up to a 1000 liters of urine, leak. After barely a few weeks, the “Naturinoirs” have become extremely damaged, and no longer work at all. And local residents describe the unpleasant consequences of this failure: “The urinals never worked! It was horror. Liters of piss flowing on the pavement and no one to clean it up. Awful!” one resident explained.

Barely six months after their installation, the “Naturinoirs” are now fenced off and out of use. The residents have asked the authorities to act. Especially since, according to their own estimates, the project had cost the municipality no less than 40 000 euros. The whole sum for a complete failure, and a total opacity on the few positive aspects of the project.

Loïc Guézo, president of the resident’s association Demain La Chapelle, confided in the newspaper: “How much did it cost? For what result? How many liters of urine recycled? And above all, we want [the company] JCDecaux, which is installing new public urinals, to take over the market.” The town hall has still not responded to the requests of residents and neither to the daily from Ile-de-France, but a “Cleanliness” meeting is scheduled for February 19.