The Dutch broadcast on Trappes which caused a commotion in France

At first sight, it seems difficult to imagine: the broadcast of a Dutch news program had indirectly caused the enormous commotion in France, forced the Minister of Education and the Minister of the Interior to respond and ultimately also reached President Macron.

The Trappes affair involving French teacher Didier Lemaire, has occupied nearly all TV channels and the written press for days now, and sparked heated debates leaving the French public with even more questions.

Since philosophy teacher Didier Lemaire from the town of Trappes (near Paris) told his story to the weekly Le Point on February 5, he has appeared on every conceivable TV and radio program and has given numerous interviews to newspapers and magazines. He is being threatened by Muslim residents of Trappes and is now protected by the police. This is due to his outspoken stances against the Salafists who he believes are taking over power in Trappes. He said he feared for his safety and eventually decided not to return to the school.

Trappes is indeed known and infamous as a Salafist stronghold from which more than sixty young people left for Syria and Iraq as jihadists.

But doubts were soon expressed in the mainstream French press: was Didier Lemaire too energetic with his media appearances and did he not exaggerate the threat? This philosophy teacher from the Plaine-de-Neauphle high school in Trappes, has consistently denounced the rise of Islamic fundamentalism. The answer from the teacher: he did not receive those threats himself. They had been received by a journalist working for Dutch television, from the Nieuwsuur program. 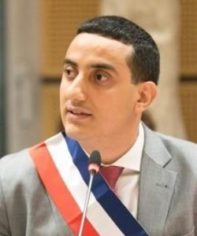 The Islamist mayor of Trappes Ali Rabeh concluded his religious pamphlet to high school students by quoting the black rapper converted to Islam Kery James who refuses to shake hands with women. The hardcore rapper, five years after his conversion, is faithful to the prophet’s practice: He does not use wind or string instruments in his music either. Twitter

Dekkers decided to inform the French police of the threats against her. The threats were received five days after January 22, in the wake of a report from Saskia Dekkers about Trappes, in which the teacher was interviewed. According to the French journalists who contacted her, Dekkers considered it her duty to inform the French police about the threatening atmosphere surrounding Didier Lemaire. But because she refused to disclose her sources, French Education Minister Blanquer said he could do little. On January 26, the police thus started an investigation and Minister Darmanin of the interior offered teacher Lemaire police protection.

In the Netherlands this huge upheaval has remained completely unreported. And when the public radio station FranceInfo asked Nieuwsuur for information about the threats, the French received a laconic answer: “In our report we dealt with our subject to inform the Dutch TV viewer about a current event in a European country. We have nothing to add to this.”

Dutch media broadcast the documentary on Trappes as an update of a first film shot in 2017 on Islamism in the city, directed by journalist Saskia Dekkers and in which Didier Lemaire already appeared. In this second report, which combines images from the previous documentary and reactions to the French bill on integration, Saskia Dekkers again questioned Didier Lemaire, but also Ali Rabeh, mayor of Trappes, and even Naila Gautier, a Muslim member of a local association, allegedly fighting against radicalization.

Gautier however contacted the Dutch journalist on several occasions, deploring an “unbalanced report” on Trappes, in particular because of the comments made by Didier Lemaire. Worried for the safety of the philosophy teacher, Dekkers decided to notify the police. Dutch media even took the decision to suspend the publication of the documentary. It was then that the police protection of Didier Lemaire was extended and that the media surge began. On January 26, behind the scenes, the judicial police of Versailles opened an investigation. Naila Gautier was summoned by the police, questioned and later released.

Yannick Jadot, figurehead of Europe Ecology – The Greens, and who hopes to be a candidate for the French presidency, meanwhile defended the radical mayor of Trappes who had stormed into a school to distribute religious pamphlets, Ali Rabeh.

Didier Lemaire gave an interview to Le Figaro, on Friday February 19, in which he reiterated his remarks: “For my safety, for the well-being of my students and the safety of my colleagues, it is reasonable that I do not continue to teach. […] But we must admit that the Islamists won a battle at Trappes. It will take time to push them back,” he lamented.

“We are no longer in France. We are no longer in a Republic. Neither freedom of conscience, of the use of one’s body, nor equality are guaranteed.” Lemaire gave an example: “A North African woman sits at a men’s coffee table, and she has to endure comments made to her. Then in the street, men spit on her, insult her, or threaten her with rape.”

The teacher added that “certain media constantly relativize the seriousness of attacks on the principles of freedom and equality”. He therefore estimated: “By participating in denial, [the media] end up giving these kind of malicious individuals [Islamists editor’s note] credit.” It is clear to this teacher that France is “at war” and is “facing an enemy which is not an army”.

What is becoming increasingly evident in France is the violent atmosphere and the far-reaching Islamization with which many neighbourhoods or zones such as Trappes are confronted.