Bluffing: Lapu-Lapu Mayor Junard Ahong Chan gets a placebo injected in front of the cameras at Barangay Pajo High School at the notable vaccination start in the city on March 3, 2021. Photo: CDN DIgital / Futch Anthony Inso

The local health authorities on the island of Cebu, state in a clarification to the media that the mayor of the city of Lapu-Lapu did not receive the correct vaccine when journalists documented his vaccination, but a simulated jab. They further clarify that this was "part of the routine".

When the city of Lapu-Lapu began its vaccinations in early March, its mayor Junard Ahong Chan set a good example. He had been campaigning for a week about the importance of all residents being vaccinated. In front of the cameras, he rolled up his shirt sleeve and allowed himself to be injected, in order to show that it was safe and secure. Now it turns out that the vaccination was just for show – there had been saline in the syringe.

CDN Digital, the largest online newspaper on the island of Cebu, Philippines, stated that it has received a “clarification” from the health authorities. This is how the newspaper reported on the matter on March 3 citing the official announcement:

However, they confirm that Chan is expected to return for a ‘second dose’ on March 31 so that one can ‘monitor side effects after being injected with saline’, and that this is only ‘part of the routine’.” 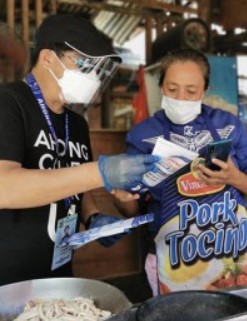 Junard Ahong Chan is one of the most vocal politicians in the Philippine island nation for tough Corona restrictions. Among other things, he has made himself known for exhibiting coffins at the military roadblocks with a call for the inhabitants to obey the restrictions. He has also sent vans mounted with loudspeakers to drive around the community at night playing howling doomsday sirens from the movie The Purge to make the residents stay at home. Here he is seen handing out leaflets about the vaccine, wearing completely mandatory attire: mouth guard, face shield and plastic gloves. When the cameras are turned off, however, he immediately removes the guards, witnesses told Nya Tider. Photo: Lapu-Lapu’s mayor’s office

Saline solution is a harmless liquid that is used in intravenous drips, among other things. It is a mixture of sodium chloride in water and is often used to clean wounds, help remove contact lenses, and help with dry eyes.

“This is to tell their voters that this is how to do it. The city was about to begin the large-scale vaccination of selected groups of the population and it all began with the mayor himself getting vaccinated, under the supervision of the local health authorities and in front of the media cameras.”

According to the newspaper, the activity lasted for about an hour.

The whole thing was initially presented to the media and thus to the population as the starting shot of the vaccination program, with real syringes – much like politicians in other countries have done. Afterwards, however, the spokesperson for DOH-7, Mary Jean Loreche, said:

“Neither the mayor nor other participants received the right vaccine. We just tested the process.”

The mayor was given a harmless syringe with regular saline. This is because the mayor wanted to show the people that getting the vaccination was okay, according to Loreche.

After being vaccinated, Chan told the cameras, some of which broadcast live, that he would return to take his second syringe on March 31.

Many have reacted to the authorities’ statement that the “vaccination” with saline in front of the cameras was “part of the routine”, and wonder how many other politicians have staged their jabs in order to portray them as harmless.

Cebu, along with Davao City, are the only places outside the capital Manila that are part of the national government’s priority vaccination program.

The entire make-believe act lasted 45 minutes. According to Loreche, there had been no CoronaVac, vaccines manufactured by the Chinese firm Sinovac, delivered to local governments yet, although 12 00 CoronaVac doses were donated by China and had been delivered to Davao City, President Duterte’s hometown.

Various political leaders decided to take a jab live on broadcasting platforms to assure people that the Pfizer-BioNTech vaccine was safe. They include Joe Biden, Benjamin Netanyahu, Kamala Harris, Prince Mohammed bin Salman and Nancy Pelosi. Prime ministers of the UK and France, Boris Johnson and Jean Castex, both received their AstraZeneca injections on camera this week. Others claimed that they would also take their jabs live, but would “wait their turn”.

JacksonMississippi Republican Governor Tate Reeves announced on March 2 on Twitter that he will now lift the current restrictions imposed on various businesses in his state in the Southeastern region of the United States.