House of One – a multi-religious house of worship for Berlin

Three spiritual representatives of Christianity, Judaism and Islam have laid the foundation stone for a common house of worship in Berlin. The "House of One" will be a church, synagogue and mosque in equal measure and a symbol of understanding between the three religions, the multi-religious group announced on Thursday.

The initiators of the project are the Protestant pastor Gregor Hohberg, Rabbi Tovia BenChorin and Imam Kadir Sanci. The latter is part of the Gülen movement, which Turkish President Recep Tayyip Erdogan blames for the attempted coup in 2016.

“We have been active in the interreligious dialogue for many years and in our daily work in the House of One Foundation we keep making our contribution to more understanding, tolerance and togetherness in our society,” said Andreas Nachama, the future rabbi of the institution. “Today Berlin is opening up once more to a special way of understanding between religions,” Sanci affirmed.

The chairman of the Evangelical Church in Germany (EKD), Heinrich Bedford-Strohm, called the project an “important sign” in view of current events. “Anti-Semitism and Islamophobia are increasing. But they are misleading because they stir up hatred and potentially lead to violence,” he told the RedaktionsNetzwerk Deutschland (RND) .

In mid-March, on the occasion of the Middle East conflict, there were anti-Israel demonstrations in several German cities. Most of the demonstrators of Arab origin chanted openly anti-Semitic slogans which system politicians in German have simply ignored.

The “House of One” is being built on the historical foundation of the Petrikirche in Berlin-Mitte, which was damaged in World War II and demolished in the former GDR. The new church will cost around 47 million euros. The federal government and the state of Berlin are contributing to the project with a total of 30 million euros. Church taxes, however, will not be used to finance the construction. 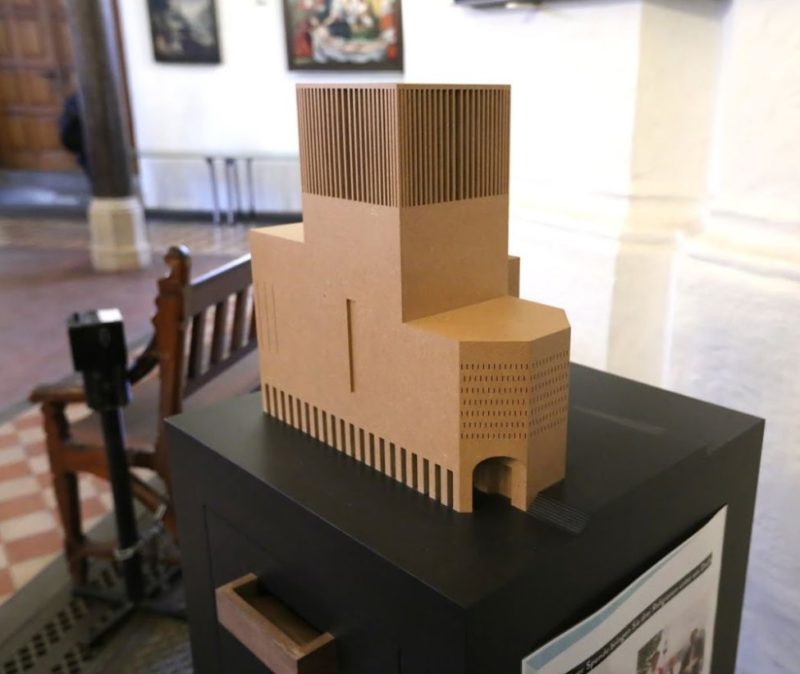 The building made up of rectangular prisms, the center one very tall, and two smaller ones surrounding it on the left and behind; the right side features a rectangular prism merged to a half-hexagonal prism of the same height. Small, frequent slit windows, a single tall vertical window and a slit arcade along the fourth side of the core, built of wood. Wikipedia