On May 23, a Ryanair plane flying from Athens to Vilnius changed course and made an emergency landing in Minsk due to a bomb threat on board. Among the passengers there was a Belarussian journalist and one of the co-creators of the oppositionist Telegram-channel NEXTA Roman Protasevich, who was detained after the plane landed. He was later arrested for the duration of an investigation. And although it happened almost two weeks ago, public attention directed at the situation of Protasevich has seen added vim as new developments on the case have come to light.

The head of the Belarussian Committee for State Security (KGB) Ivan Tertel announced on May 26 that Roman Protasevich was involved with the activities of the Ukrainian nationalist battalion Azov.

“It is undeniable that this person fully complies with the definition of a terrorist, a mercenary fighter, a participant in bloody events (as part of the infamous Azov battalion) associated with the atrocities and deaths of civilians in south-eastern Ukraine,” Tertel said.

According to the KGB of Belarus, this is not only information from the Committee and the investigation, but also “facts presented in the media with personal confessions of Protasevich, which are widely available.” Tertel also stated said that Protasevich “actively applied the experience gained” in relation to Belarus: “He was the organizer and coordinator of mass riots that endangered the life and health of ordinary citizens and law enforcement officers.”

It is noteworthy that the former commander of Azov battalion nationalist Alexander Biletsky tried to assure the public that Protasevich did not take up arms and “fought only with words”, since he was a journalist.

“Yes, Roman indeed, together with Azov and other military units, fought against the occupation of Ukraine. He was with us in Shirokino [one of the villages in Donbass where the armed conflict has continued since 2014], where he was wounded. But his weapon as a journalist was not a machine gun, but words,” Biletsky said.

However, later photographs appeared on the web allegedly from Protasevich’s smartphone where he was captured in the military uniform of the Azov battalion and with carrying arms. 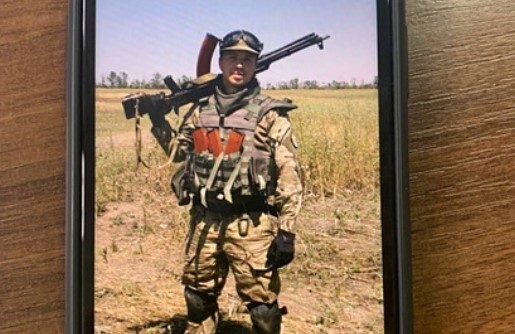 A soldier, not a journalist: Roman Protasevich. Photo supplied

The published images show how a journalist with a weapon in his hands moves along with units of the Armed Forces of Ukraine in an armoured vehicle. The emblem of the battalion is visible on the sleeve of the young man.

And while there is a huge debate in Ukrainian media over whether Protasevich participated in the battles as a soldier or was only in Donbass as a journalist, the break-away republics of Donbass provided a clear demonstration of their opinion on this matter.

The General Prosecutor’s Office of the Lugansk People’s Republic announced that they would be opening of a criminal case against Roman Protasevich: “It was established that in summer of 2014, that Protasevich Roman Dmitrievich voluntarily joined the ranks of the terrorist organization Azov, banned in the Lugansk People’s Republic. Then, from summer of 2014 to winter of 2015, together with other unidentified persons Protasevich took part in military actions in Donbass as a deputy commander of communications of the Azov second assault company.”

Interestingly, the Belarussian President Alexander Lukashenko promised to give Lugansk intelligence officers access to Protasevich in order to carry out investigative procedures. During the meeting as part of a working trip to Sochi, where negotiations were held with Russian President Vladimir Putin, Lukashenko agreed that investigators from Donbass could come and interview Roman Protasevich.

“There are nuances: a criminal case has been opened in Donbas against these persons. To which I told President Putin, I reminded him that a criminal case had been opened, and said that if they [the investigators leading this case] have questions for them, you are welcome, please ask them questions, because they killed people there, in Donbas,” Lukashenko said.

Thus, some experts interpreted this statement from Lukashenko as a clear friendship gesture from the Belarussian leader towards Donbass authorities. It is especially notable since Lukashenko has never before expressed such open public support for the break-away republics and their activities. This might mean that after a significant and intentional escalation of tension between Belarus and European countries, Lukashenko will choose better relations with Russia and Russia-supported territories.