"Tessa" Ganserer has been a Green Party member of the Bavarian State Parliament in Germany since 2013. In 2018, the married man with two sons came out as transsexual, wearing an ill-fitting blonde wig, short miniskirts and carnavalesque make-up. One citizen, who could not suppress his laughter online at this clown-like transformation, has now been harshly punished.

A German blogger Klaus-Peter Weber was made to pay a hefty fine of 24 000 euros for insulting the transsexual MP as well as two other “women” because of their new looks. On appeal, the penalty was even increased because in a first trial, the district court in Hersbruck had sentenced the defendant to 40 daily rates of 80 euros each.

The Nuremberg-Fürth district court sentenced the defendant to 120 daily rates of 200 euros each. He now has a criminal record, said a court spokesman last week.

The blogger has an Internet platform that has around 100 000 followers. He condescendingly expressed his mirth at the appearance of the transgender Ganserer and two other women in a photo.

Among other things, he called them the “laughing stock” of German politics and commented that one could “put them on a cigarette box as a warning”.

Ganserer praised the ruling and MPs described the verdict as a “victory for democracy and human dignity”. 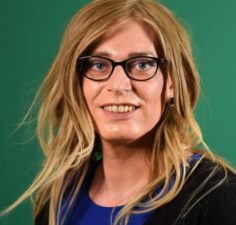 “We humans are all different, but the same in dignity. Trans-hostile degradation is not an opinion and the Internet is also not a legal vacancy,” the transsexual said. The statements of the blogger were defamatory and degraded women to objects, the court ruled, according to a party spokesman.

Ganserer became the first member of the Landtag of Bavaria and of a German parliament to be openly transgender. He made his first public appearance as a woman at a press conference in Munich on 14 January 2019. Ilse Aigner, a member of the Christian Social Union in Bavaria and President of the Landtag of Bavaria, supported Ganserer in his transition and welcomed him to parliament as a woman.

While the gender change has not yet been legally finalized, he is recognized in the Landtag as a woman.

Ganserer, who was known as “Markus” before, is still married to Ines Eichmüller and has two sons.

The blogger’s lawyer said in court that mocking politicians was freedom of expression, but according to the assessment of the Alliance against Right-wing Extremism in the metropolitan region of Nuremberg, the blogger Klaus-Peter Weber was “clearly racist and endangering democracy” with his online media channel Hallo Meinung.

His portal has been in operation since the end of 2018 and has been publishing videos suggesting that Germany was on the way to being ruled by migrants and other “conspiracy theories” they claimed.